Checklist of the Land Snails and Slugs of California

Checklist of the Land Snails and Slugs of California, Second Edition is the modern guide to terrestrial mollusks of the region.

This updated work presents an inventory and classification of the land snails and slugs of California and reports their distribution by county, based on examination of about 12,000 specimen lots in museum and private collections. It reports 279 species known to be living in the state. Thirty-seven species are not native to California but have been introduced from elsewhere. Six additional taxa are known only as late Quaternary fossils. The locations of primary type specimens are presented.

Type specimens of 64 land snail taxa described by S. Stillman Berry and others are illustrated by detailed color photographs.

The suprageneric taxonomy employs mainly taxa that have been demonstrated to be monophyletic by studies using the principles of phylogenetic systematics, including current work on DNA sequences. Where this has not been possible, the basis for non-cladistic judgments is described. New generic assignments and other innovations that are not simply the consequences of previously published literature are fully annotated. 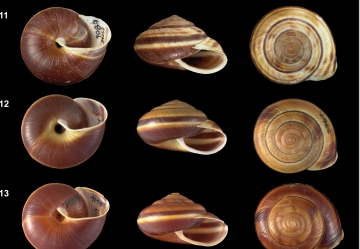