Marine endolithic and wood-boring bivalve mollusks living in rocks, corals, wood, and shells were surveyed on the Caribbean coast of Venezuela at Isla Margarita between 2004 and 2008. These surveys were supplemented with boring mollusk data from malacological collections in Venezuelan museums. A total of 571 individuals, corresponding to 3 orders, 4 families, 15 genera, and 20 species were identified and analyzed. The species with the widest distribution were: Leiosolenus aristatus which was found in 14 of the 24 localities, followed by Leiosolenus bisulcatus and Choristodon robustus, found in eight and six localities, respectively. The remaining species had low densities in the region, being collected in only one to four of the localities sampled. The total number of species reported here represents 68% of the boring mollusks that have been documented in Venezuelan coastal waters. This study represents the first work focused exclusively on the examination of the cryptofaunal mollusks of Isla Margarita, Venezuela. 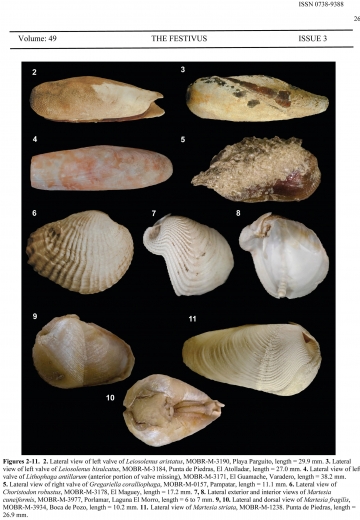