The objective of this study was to examine the ecology of coral boring bivalves from four islands southeast of Ko Chang, Trat Province, Thailand. A total of 11 bivalve families containing 18 species were recorded in the survey, including six reported for this first time in the region. Members of the Mytilidae comprised the highest bivalve diversity with five species recorded. The five most abundant species were Leiosolenus lima (Jousseaume in Lamy), Lithophaga teres (Philippi), Botula cinnamomea (Gmelin), Coralliophaga coralliophaga (Gmelin), and Gastrochaena cuneiformis Spengler.

Following the same trend of all dominant boring bivalves, corals more than nine years old showed the highest frequency distribution and the largest shell length. The distribution of shell height frequency showed Leiosolenus lima and Lithophaga teres had more variation in shell height than the other five dominant boring bivalve species. Endolithic bivalves are one of the main bioeroders in the coral biome. The ecologic data presented in this study can be used as one indicator of coral reef status, including bioerosion and nutrient recycling in coral ecosystems. 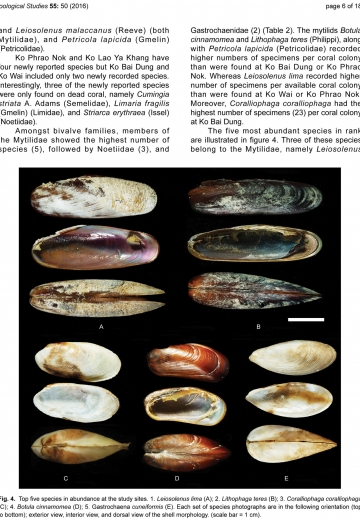