As a young visitor to the Museum, I never really looked behind the taxidermy. I never imagined that there were scientists behind the scenes, managing collections and pursuing their own research. It certainly never occurred to me that collections housed here in Santa Barbara would draw researchers from other institutions worldwide. This reflected not only my lack of knowledge about the Museum, but something I didn’t yet understand about science: that it’s conducted not by lone wolves, but by pack animals.

This might sound surprising, in light of what we all usually picture when we imagine a scientist. Even if we’re lucky enough to know some real scientists, we typically visualize someone whose expertise exceeds their social skills, someone who’d rather spend Friday nights alone in a lab than having a beer with friends. Shows like The Big Bang Theory derive their humor from this entrenched stereotype. What the stereotype gets right is the fact that scientists are typically passionate about what they do, and most of the time they’d rather be doing it than anything else. They’re in it for love, and not for the money, which you can confirm by asking any researcher what they earn.

What the stereotype overlooks is the fact that to achieve anything of note, scientists must work together. They rely on each other to bring different skills and data sets to a shared project. Curators bring something extra: specimens. Drawers and drawers of them. Shelf after shelf of meticulously sorted eggs, bones, skins, fossils, and artifacts, jar after jar of carefully preserved organisms. Oh, and shells. If you want to see shells, come to Curator of Malacology Paul Valentich-Scott. You’d better make an appointment, because there are 2.5 million shells to see here.

Prof. Carole S. Hickman—a paleobiologist at UC Berkeley—came to the Santa Barbara Museum of Natural History’s Department of Invertebrate Zoology to see some of Paul’s shells. She’s looking for modern counterparts to the fossilized bivalves found in an unusual geological formation in Oregon. The Keasey Formation holds a record of animals that lived around a deep-sea cold seep about 35 million years ago, during the transition from the Eocene to the Oligocene. During this transition, various factors—debris scattered by volcanoes and meteorites, a reduction in atmospheric carbon dioxide—cooled off the Earth’s climate. This shift killed off tropical species and encouraged cryophilic (cold-loving) ones. Hickman’s work follows the evolutionary lineage of the bivalves involved in this event, tracking the survivors to their modern-day descendants and documenting the discovery (via fossils) of lost species formerly unknown to science.

After decades as a top researcher on mollusks past and present, Hickman is coming full circle: her current work on the Keasey Formation is a more exhaustive, updated take on the subject of her early research. When she first published about the mollusks of the Keasey Formation in 1984, scientists were just beginning to learn about deep-sea vents and seeps, which we’ve since been able to explore more extensively with the help of ROVs (remotely operated underwater vehicles) and submersibles. At deep-sea hydrothermal vents, water as hot as 100 degrees Celsius (about 212 degrees Fahrenheit) and loaded with chemicals toxic to most life streams out of the ocean floor. At cold seeps, hardy organisms cope with the chemicals in the “normal” frigidity of the abyss. Bacteria that create energy from the chemicals—in a process called chemosynthesis (think photosynthesis, without sunlight)—provide the basis of life for the network of extremophiles living there. As in science, there’s a community where we expect sterility.

When I met Hickman, she was using a microscope to examine details of shells from a marine bivalve collected from the depths of a Norwegian fjord during the early twentieth century. The shell is from the genus Acesta, now known to be part of the cold-seep community. The collector’s spidery, old-fashioned handwriting informed us that this mollusk lived at a depth of 300 fathoms, which—as Valentich-Scott observed—is “pretty friggin’ deep.” A fathom is equal to six feet, so 300 fathoms equates to 1800 feet, or 548.64 meters. The Norwegian shells are good-sized, about as long as my hand, and relatively light. Hickman is interested in the lightness, as this is a characteristic notably shared by the fossils for which she’s seeking a modern match.

She passed me a specimen of extraordinary lightness, so thin it’s translucent. Less than two inches across, it’s like a fairy teacup. Next Hickman planned to examine some Glass Scallop shells, which are still lighter. These delicate creatures evolved little strut-like structures to reinforce their featherweight homes. 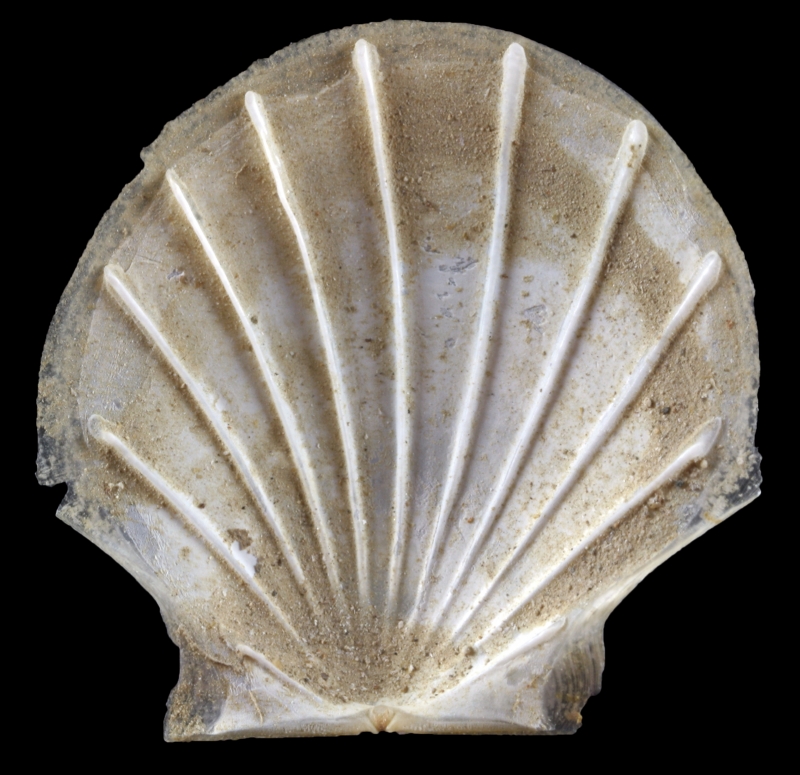 To be of value to researchers like Prof. Hickman, objects like these need to come packaged with information about where, when, and how they were harvested, whether they were scooped up by a dredge in 1930s Norway or delicately plucked by the robot arm of a Monterey Bay Institute ROV off the Pacific coast in 2004. The curator’s task is not only to preserve the specimen, but to make the information associated with it accessible. The Invertebrate Zoology collection keeps Hickman coming back to Santa Barbara because it’s unusually well-documented. “I know that when I come here,” she says, “I’m going to open a drawer and see that each specimen has all the information I need to know attached to it.”

Keeping order in the drawers—and improving accessibility to data—has been Valentich-Scott’s work for 36 years. When he started working here in 1982, the relatively spacious north wing of the Collections and Research Center didn’t exist, and Invertebrate Zoology (or IZ, as it is affectionately known on campus) was housed where the Anthropology Department is now. The old space relied on wood cabinets, a liability because they invite pests that can destroy specimens. IZ’s current home includes space-efficient rolling metal cabinets, a scanning electron microscope, and an elaborate photography setup for capturing small specimens in perfect detail. The extra space was also necessary to house a collection that’s increased in size by an order of magnitude. When Valentich-Scott began, the collection had 40,000 boxes. Today, there are about 400,000 boxes. (Each box contains a single species—but potentially many individuals—collected at one time in one place.) 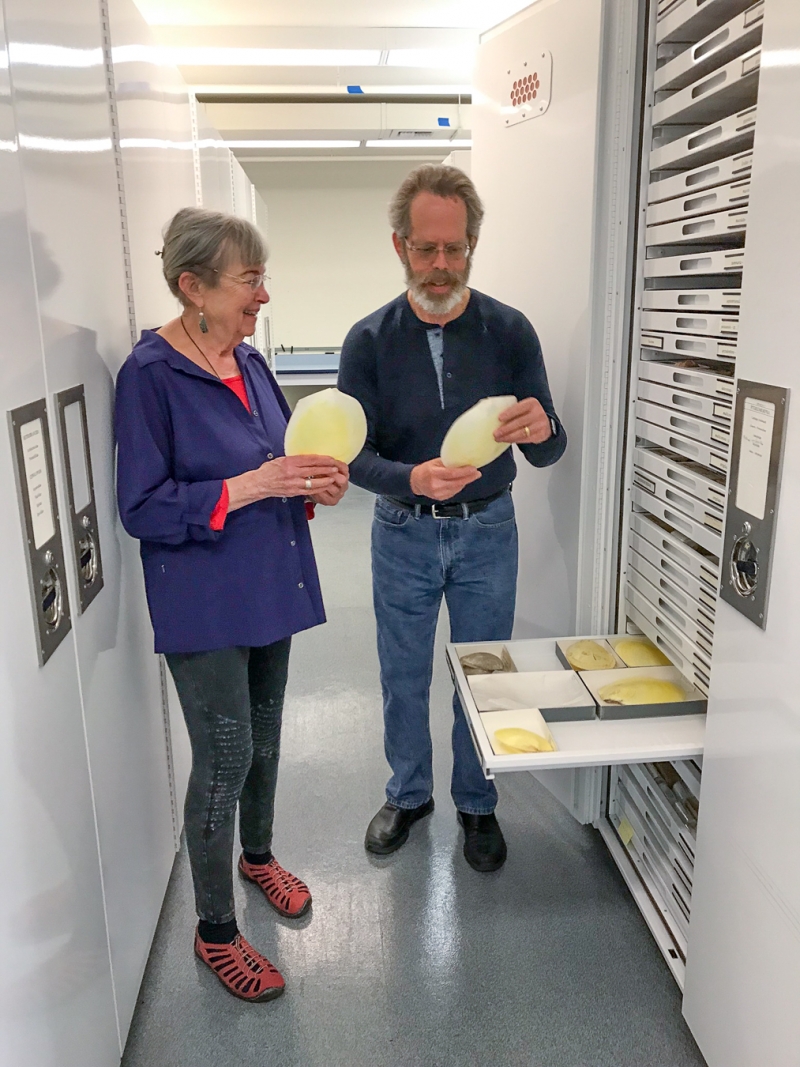 In 1982, there weren’t any computers in the department, but since then, about 110,000 boxes have been digitally cataloged. That catalog is available to the public at sbcollections.org, and is constantly growing as Curatorial Assistants Julia Schorr and Jessica Bullington identify specimens and enter data to keep pace with visiting researchers like Hickman. When a scientist contacts Valentich-Scott about part of the collection that isn’t yet digitized, Valentich-Scott sends photos of the relevant drawers and puts Schorr and Bullington on the case. Visiting scholars who are specialists also help with the effort to catalog specimens, by identifying species which have stumped Museum staff. Together, they all make incremental progress toward making the data associated with those 400,000 boxes accessible.

Yet the pace at which this community works is exceeded by the pace at which its support network contributes still more boxes. Researchers who come here and have a positive experience—impressed by the scope of the collection, the documentation, and ease of access—often decide to leave their own libraries and specimens to SBMNH. This means more work for Paul, Julie, and Jessica, but it also means their work has been a success, helping researchers from all over the planet. IZ has been honored by guests and specimen donors from throughout Asia and Europe, from Australia and New Zealand, Tanzania, South Africa, and Israel. Russians and Japanese scientists often visit to see specimens from the Eastern Pacific, to contrast with their own Western Pacific species. Scholars from Central and South America come with a similar interest in comparing what we have up north with their local animals.

The wide global network of which IZ is a part shows the social connections that underlie the science. As Valentich-Scott says when students are reluctant to travel to a conference or meeting, “It’s not about the meeting, it’s about meeting people. You can sit in all the lectures you want and learn some things, but really, it’s havin’ that beer with the right person.” He should know. Early in his career, a post-presentation beer once scored him a month of research experience in Hong Kong. Later, a mid-conference conversation over drinks led to the discovery of a new species, finally described after a 20-year association. “Science over a beer: it happens a lot, as it turns out.”