Madeleine A. Becker describes herself as “an animal enthusiast in general.” Yet unlike most cat video connoisseurs, she can truthfully say, “I have 157 mouse toes currently in my possession.” This early-career scientist owes her many toes to how she’s channeled that enthusiasm for animals into a well-rounded background of great promise.

A Ph.D. student at George Mason University and a graduate fellow at Smithsonian Center for Conservation Genomics, Becker has studied a variety of animals, including dolphins, grouse, and the Island Fox. She analyzes their genes—and the genes of organisms living within and alongside them—to unravel their evolutionary history and ecological relationships. She visited our Museum in January to gather 74 toes for her research on Island Deer Mice (Peromyscus maniculatus). To do so, she had to convince Curator of Vertebrate Zoology Krista Fahy, Ph.D., the gatekeeper of our Vertebrate Zoology Collections, that the specimens’ irrevocable loss of toes would be offset by the benefits to science. 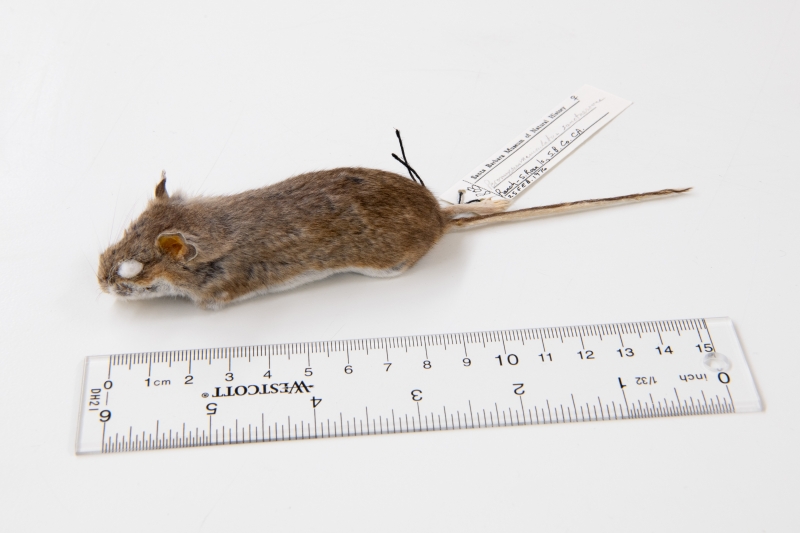 What Toes Can Tell Us

“Out of those 157 mouse toes, I plan to write three chapters of my dissertation,” says Becker. “All the questions I can get out of them, I will try to ask.” While Deer Mice are widespread throughout North America, the populations on the eight Channel Islands are unique to each island. The value of the specimens from the Channel Islands goes beyond those geographical confines. Their genes could offer insights not only into what makes a population unique, but also into ecological relationships, island history, and evolutionary patterns. When did the ancestors of these mice arrive on the islands? Where on the mainland did they come from, and how did they spread among the eight islands? How has the fragility of island life affected their genetic diversity? Have ecological disturbances such as those caused by invasive species aggravated the risks of inbreeding associated with small populations living in isolation? How might human activities like trans-channel tomol trips have played into their early history, or livestock barges and ferry trips into their more recent past? Have human interventions like eradication measures targeting invasive Black Rats affected their genetic diversity?

Becker’s wide-ranging inquiries are made possible by a combination of factors: Robust museum collections inspired her to ask big questions, and revolutionary genomic technology provides the tools to answer them.

Her toe collection draws on our own extensive Island Deer Mouse collection, with substantial samples of these mice collected during the 1970s and 1980s, when Museum curatorial staff collaborated with Channel Islands National Monument on a baseline assessment of the natural resources of Anacapa, Santa Barbara, and San Miguel Islands. (This was before the Northern Channel Islands achieved national park status.) During fieldwork, Museum staff were able to salvage the bodies of Island Deer Mice accidentally captured in Victor rat snap traps set for invasive Black Rats on Anacapa and San Miguel Islands. The mice collected from the islands didn’t die in vain; they have since been used by researchers for numerous published studies illuminating the history of their changing genes and physical traits, as well as the practices and challenges of their conservation and management.

Natural History Museum of Los Angeles County (NHMLAC) supported Becker with a grant to travel to L.A. and sample their many mice, most of which were collected during the Channel Islands Biological Survey of 1939–1941. NHMLAC also granted her a tiny sample to sequence a rare specimen of Peromyscus anyapahensis, an ancient deer mouse from the late Pleistocene. Together, these specimens cover a useful range of dates and all eight islands. 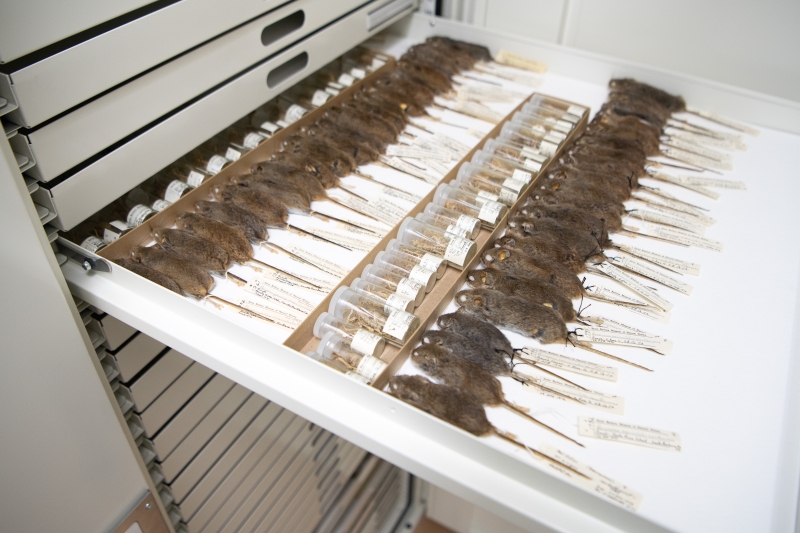 The Vertebrate Zoology Collections here include numerous drawers of Island Deer Mice, holding both preserved specimens and skeletons in tubes and boxes for researchers like Becker to consult. Her 74 toe samples from SBMNH also included 10 “crusties”: dried tissue stuck to skeletal specimens.

“Because there are eight islands, and on each island is an endemic—slightly different but overwhelmingly similar—subspecies of mouse, you kind of already have your experiment set up,” explains Becker. Being able to compare genomes across all these times and places should help her isolate the variables that have influenced evolution. Having this range of comparisons could also inform the future of conservation measures. “We have a more robust experiment for thinking about how conservation measures like eradicating Black Rats affect a really dynamic system.”

The unique biodiversity of the Channel Islands (for which they’ve been dubbed North America’s Galapagos), the value of islands as places where nature has effectively already run evolutionary experiments, and the ongoing project to restore their species and habitat to a state of balance all make the archipelago a locus for this kind of research in general. There’s a tremendous amount of Channel Islands expertise among Becker’s colleagues back east. But she also enjoyed visiting SBMNH and NHMLAC to tap the expertise of curators with these islands in their front yard. 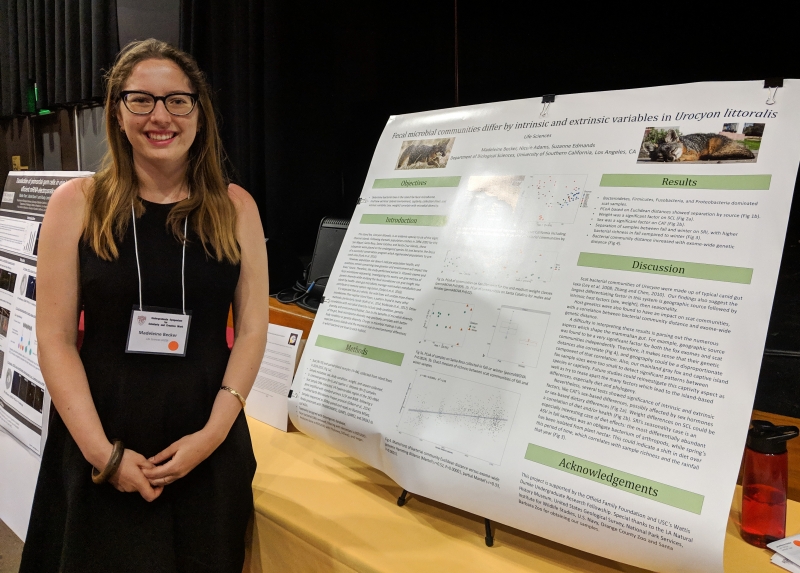 Becker’s Channel Islands work started during her undergraduate years at University of Southern California, analyzing the microbiomes of Island Foxes from different islands and zoos. This research made great use of an abundant resource on the islands: fox scat!

Earlier in her career, Becker volunteered at NHMLAC, and her experience preparing specimens and working behind the scenes gave her insight into the work and concerns of curators. “As a researcher, I can make a more convincing case for why I should have access to a museum collection.” 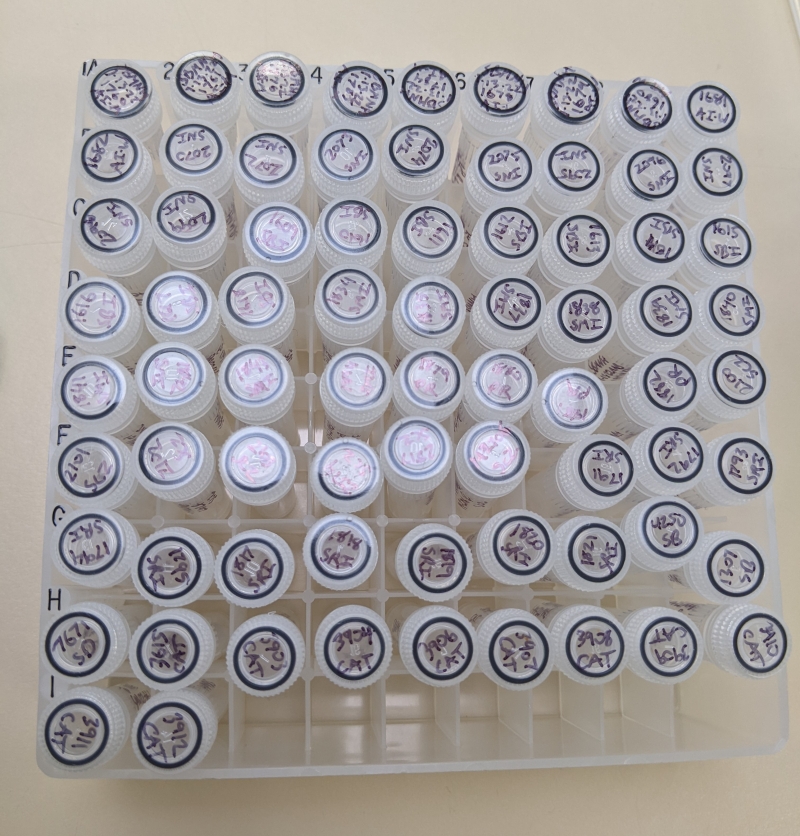 Having acquired her toes, she’ll have to bust up the tissue before extracting the DNA. Other researchers at the Center for Conservation Genomics have touted the benefits of toes as samples, since they bundle multiple tissue types like bone, skin, nails, and fur all in one tidy package. “After extracting DNA, I’m going to add a customized solution that’s going to have molecular probes that specifically bind to mouse DNA at the regions that will be important for answering my questions.” This will help avoid contamination from humans who handled the mice, or from other organisms (especially bacteria). The ability to avoid contamination has enabled increasingly sophisticated work with fragile ancient DNA and elusive environmental DNA (eDNA), where the genetic material comes from minute traces like mucous or oil secretions conjured out of water and soil. (Some of the most exciting research combines both ancient DNA and eDNA; turns out stalagmites are great time capsules for cave bear DNA!)

Finally, Becker will put software and coding skills to work to untangle the history stored in the DNA, turning it into data she can use to answer her many questions about the mice and their environment. Constantly improving genomic and statistical software make it possible for researchers to find out much more from DNA than they could just a decade ago.

Since DNA is so small, visualizing and manipulating it requires the use of chemical markers and dyes that stick to specific building blocks of DNA and allow us to read them as a proxy for the original code. Traditional Sanger sequencing—developed in the 1970s and the only game in town until the late 2000s—and next-generation sequencing (NGS) both rely on reading the order of dye tags as broken-up and unzipped pieces of DNA rebuild themselves. What makes NGS special is the volume: the rebuilding process takes place across many short fragments at once, in a specialized machine containing billions of little wells. This “massively parallel” scale enables cost-cutting speed, so the price of sequencing has plummeted with the adoption of NGS methods. “The classic illustration is that sequencing a single human genome during the human genome project cost from $500 million to $1 billion, but today, this costs less than $1,000.” This newfound ease has enabled researchers to expand their scope, shifting from strictly prioritizing our own species to learning about the other lifeforms with whom we share the planet, not to mention those who came before. Becker will probe the secrets of this species’s genome, but has never gazed on its cute face in the wild. Another good reason for her to come back to California. Photo by National Park Service

Despite building up her biological expertise of Channel Islands species and ecosystems, Becker has yet to visit. “That’s my embarrassing fun fact,” she admits. “I’m just building suspense, really.” But her interest in animals and evolution—which started in childhood as a fascination with the history of wolves and dogs—was nurtured on islands. Becker is part Native Hawaiian and visited that archipelago with her family on trips that intensified her interest in how life changes and diversifies.

“You kind of take your nature for granted when you’re a kid. But then I would go to Hawaii, and think, this is insane! Every bird seemed amazing. Every chameleon on my grandmother’s lanai was amazing.” Geology inspired her to think about life’s processes and timescales (as it did for Darwin). “In Hawaii, the islands are still being made. The big island is still growing, parts of Hawaii are sloughing off into the sea. When you see geologically all this happening, it makes it easier to realize it’s happening at the biological level, too. That’s where I started thinking more big-picture about evolution and biodiversity as an ongoing process.”

Childhood visits to Hawaii made their mark. Left, Becker visiting tidepools with her mother near her grandmother’s house in Hawaii Kai, Oahu. Right, Becker and sister at Pohakupu Park, Kailua, Oahu

The geologic pace of research, on the other hand, can seem slower than the formation of fresh, young islands. Sequencing and analyzing the material from Becker’s samples will be—like other dissertations—a major undertaking. It could be years before she has results, and further years before the results are analyzed, peer-reviewed, and published. None of this time will be spent communing with cute mice friends. People sometimes ask her what it’s like to be around dolphins or hold an adorable Island Fox. Time for a biology reality check: “I don’t know, I’m on the computer, I do a lot of coding, a lot of reading, and a lot of writing.” But being up-to-date on literature about animal behavior gleaned from other researchers’ field work is important: “You put the organism first, that’s where the questions come from. If you just treat it like DNA sequences, you might miss something about what this means.”

Skills to Grow Your Science

Even field biologists spend most of their days on the computer, and coding experience is fast becoming a necessity rather than an option. But developing these skills need not be intimidating. Becker took a computer science course in high school and an R course for biologists in college, but she’s built much of her coding ability on the job, driven by the particular needs of each research project. “Especially for undergrads, it’s the best way to get a foot in the door if you’re looking to get into a lab. Everyone’s looking for someone with computational skills.”

There’s a lot of online community out there to learn from as you build those skills. “People who do bioinformatics are always complaining, ‘Why is 50% of my time converting file formats and Googling?’ but it’s nice to have that kind of online solidarity, going on all these different websites where people are having the same errors as you. They’ve already solved your problems. Really, I’m just an advanced Googler.” This echoes her philosophy of science in general: “Being a scientist can take so many forms, and what it comes down to is curiosity and asking questions. Whatever you think of in your head when you say ‘scientist,’ you don’t need to contort yourself to be that person in order to be a scientist.”

But if you want to pursue a research career, she recommends paying attention in English class. Writing skills are important, “whether it’s publications, or writing grants, or trying to persuade someone to let you steal some toes.”

Mouse toes, fox scat and coding. What a fascinating story. Thanks for sharing.

A Brief Guide to the Wild Birds of the M...

Volunteering at the Sea Center: How it C...