The deep sea is in the news a lot these days, as it becomes more attractive not only to extractors of fossil fuels, but to makers of electric car batteries. The International Seabed Authority is charged by the UN with the task of regulating this mining to protect the environment. It’s a difficult challenge for many reasons, such as that we’re barely beginning to understand the ecosystems mining may affect. Museum collections have a major role to play in building that understanding, both as repositories for samples that document the existence of deep-sea organisms, and as bases for the scientists who study those organisms.

Hugh MacIntosh, Ph.D., visited our Department of Invertebrate Zoology to compare the deep-water clams in our collection with clams among the astonishing array of invertebrates he’s helped to sample and describe from the depths of the Great Australian Bight. Until the last decade, the depths of the bight—the enormous open bay along Australia’s southern coast—have been overlooked, but interest in oil and gas drilling in the region brought urgency (and funding) to scientists’ efforts to learn about the largely unknown seascape. 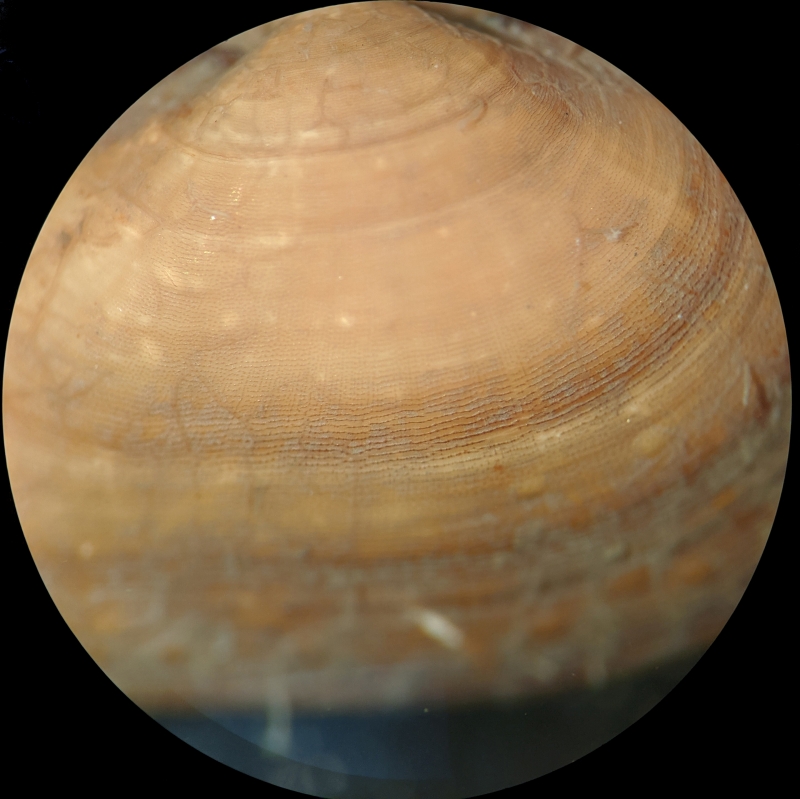 This mysterious planetscape is actually a microscope’s-eye view of a miniscule deep-sea clam in the genus Portlandia, from the Museum’s collections. Photo by Hugh MacIntosh

Dr. MacIntosh is now the invertebrate zoology collections manager at the Royal British Columbia Museum, with numerous publications in deep-sea biodiversity to his name. When he visited Santa Barbara to look at our deep-sea clams, he was building his capacity for expert identification. Because the Australian surveys were some of the first deep-sea work in that area, there wasn’t much local material he could use to compare with it. “All I really had to go by on the bivalves was the literature,” he explains. “Some of the best books I had to go by in Australia were these volumes by Paul Valentich-Scott and Gene Coan.” MacIntosh met SBMNH Curator Emeritus of Malacology Paul Valentich-Scott at a malacology conference in Monterey, and Valentich-Scott invited MacIntosh to come see the collection here in Santa Barbara.

MacIntosh spent a week poring over our deep-sea specimens from around the world, to confirm his understanding of the species he was seeing in Australian samples. He concentrated on the Robert Vrijenhoek Collection, formerly at Monterey Bay Aquarium Research Institute, which draws on sampling of the Mid-Atlantic Ridge, Indian Ocean, Monterey Canyon, and whale falls.

“Seeing lots of specimens in person helps build up my memory bank,” explains MacIntosh, “so when I come across something down the line, I know I’ve seen that before.” The benefit was reciprocal, since MacIntosh already had the expertise to more precisely identify some of our loosely-named specimens. “This really well-curated collection has material from all over the world, that goes down very deep. It’s an excellent spot to come to and see this reference collection and confirm my identifications. They’re not going to be the same species necessarily, but they’re the same genera.”

The 2011–2017 surveys illuminating Australian fauna were conducted by the Museum of Victoria in Melbourne. MacIntosh participated while working as a lecturer at the University of Victoria. When all the organisms had been sorted out of the mud, there were 66,721 specimens, representing 1,267 different species. Of those 1,267 species, almost a third (401) were species new to science. That’s eye-opening biodiversity for an energy-limited plain of fine mud, and it could be just the tip of the iceberg, since the sampling areas were tiny relative to the overall area. “If we went out and did this again, we’d probably find double the number of species. That really excites me. There’s still so much to find.” 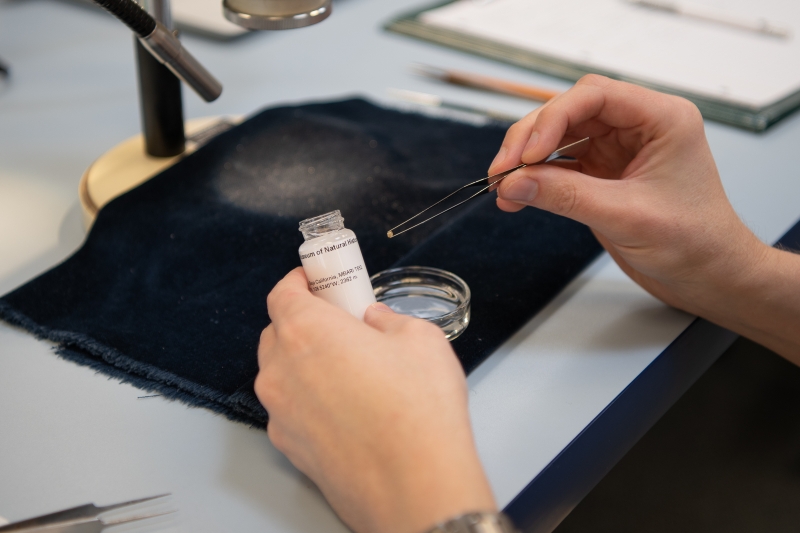 Handling shells smaller than a grain of rice requires specialized spring-loaded tweezers—like those used by entomologists—to avoid crushing the specimen.

MacIntosh needs intellectual excitement to fuel him because his work is unenviably fiddly on a physical level. “All this week, the largest of the clams I’ve been looking at is not even an inch long,” says MacIntosh, gesturing at a specimen under his microscope barely the size of a grain of rice. Small clams are difficult to work with and have received little attention from scientists. By comparison, the large clams found at hydrothermal vents are well-studied, but not that diverse.

Tiny deep-sea clams owe their size and variety to their unique conditions. Bivalves in the shallows mostly filter feed on plankton in passing currents, and clams living near vents have bacterial symbionts who produce abundant energy to beef them up. Their tiny relations in the still depths can’t rely on such nutrient streams. “By the time you get to the deep sea, in some cases 9,000 meters deep, no plankton really reaches all the way down there. You wind up with this fine particulate matter that trickles down.” This light dusting is known as “marine snow.” The clams are tiny as a consequence. The limited resources permit small-bodied organisms to succeed where large-bodied ones would struggle.

To make the best use of the limited food supply and lack of currents, some tiny deep-sea clams shovel in the available sediment with palps (long feeding appendages). Other deep-sea clams (and a few shallow-dwelling ones) are carnivores who sense and inhale tiny animals. Some clams specialize on whale falls, the deep-sea smorgasbord that occurs when the carcass of a dead whale sinks to the bottom, providing a feast that can last for a decade or more. How long is that feast in the life of a deep-sea clam? “We have no idea how long these clams live,” says MacIntosh. The enigma of their unknown lives only makes them more compelling to him. 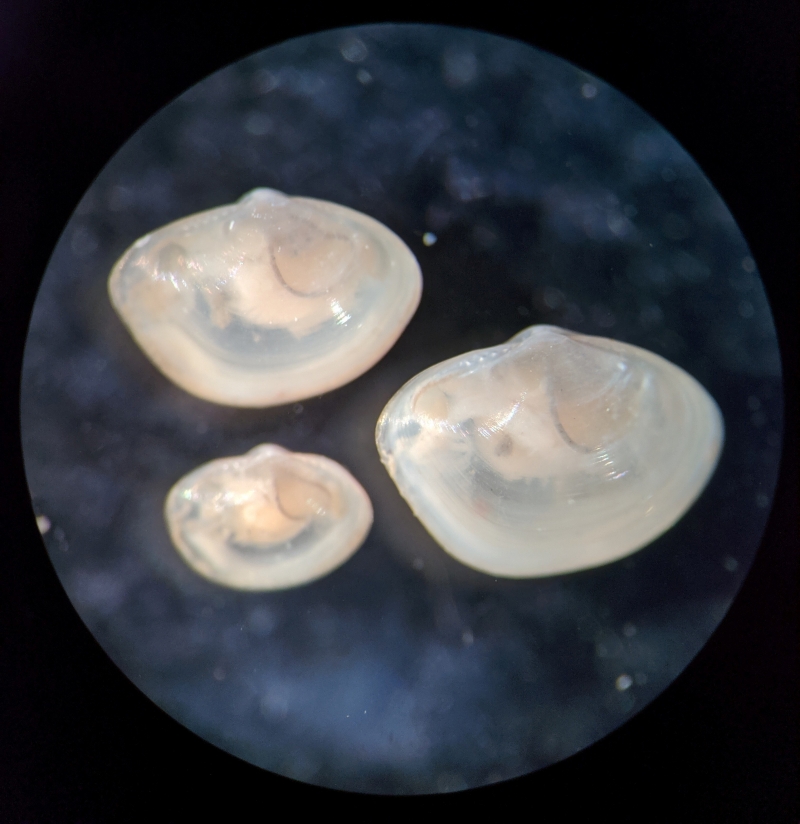 Three detritus-feeding clams in the genus Yoldiella in the Museum’s collections reveal delicate, partly-translucent shells under the microscope. Photo by Hugh MacIntosh

Little-known deep-sea organisms like these tiny clams have a direct connection to the ecosystems of the surface. “These deep communities are really important,” asserts MacIntosh. “These animals that break down the nutrients in the deep sea are part of what convert all the carbon that drifts down. They help lock up some of the carbon stored in the ocean,” keeping it out of the atmosphere and buffering the rest of the planet from the effects of greenhouse gases. “These communities are also part of producing the nutrients circulated with upwelling, which produces more productivity up here.” Just as the depths rely on the surface for what falls, surface waters rely on the depths to process nutrients. Those nutrients are needed to produce the seafood we love to eat, and sustain the sea life we encounter with delight.

In our rush to secure our own energy sources, we are now poised to impact the low-energy—but nonetheless productive—ecosystems of the deep sea. “We need to know beforehand, what’s the baseline?” says MacIntosh. “What species are normally there? How abundant are they?” Without knowing that, we can’t gauge the effects of our activity. The forces driving the expansion of deep-sea mining are no longer casual economic interests, but urgent responses to global existential threats. This urgency puts pressure on scientists, museums, and other research institutions to collaborate faster than ever, sharing information in time to inform policy.

“This is why I love working in the museum world,” says MacIntosh. “With the priceless collections of specimens and expertise of researchers who study them, museums are uniquely positioned to answer big questions like these.” 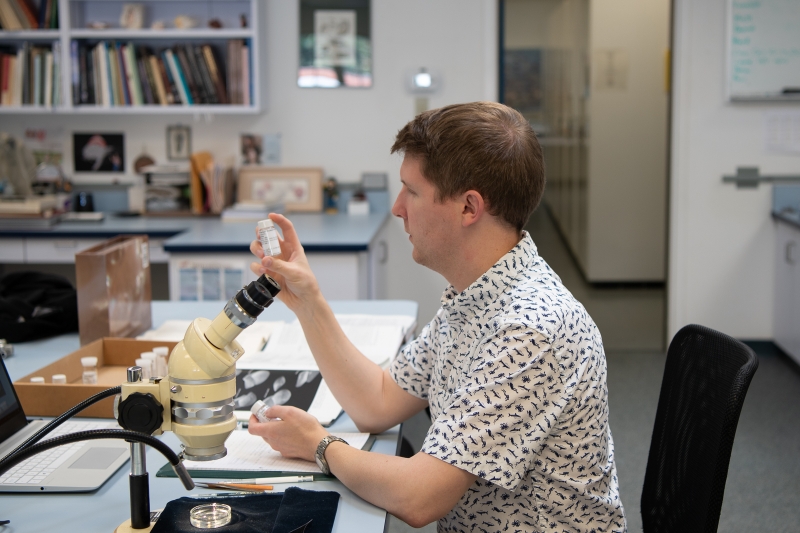