How I Spent My Summer Vacation: Quasars on Santa Rosa Island

Marcel Proust famously wrote that “the only true voyage of discovery…would be not to visit strange lands but to possess other eyes, to behold the universe through the eyes of another.” Yet in the effort to develop new perspectives, “visiting strange lands” sure helps. Travel broadens horizons, forcing us to grow as people. Adapting to new circumstances, we stop inching like caterpillars and start flying like butterflies. That’s growing up.

Everyone knows there’s an awkward stage between caterpillars and butterflies: a phase of reflection and transformation that takes place when something home-bound and humble concentrates its potential to become something far-ranging and splendid. Our Quasars to Sea Stars program invites a select cohort of teens to pupate with us, spending their free time during high school volunteering, studying, and working at the Museum and Sea Center. We call them quasars because—like the celestial objects—they emit a lot of energy, and the spectrum ranging from the skies to sea stars reflects the range of natural phenomena available to study here. The program is a great way for motivated teens to start exploring paths in science and education, and it offers unique opportunities for them to learn and grow. 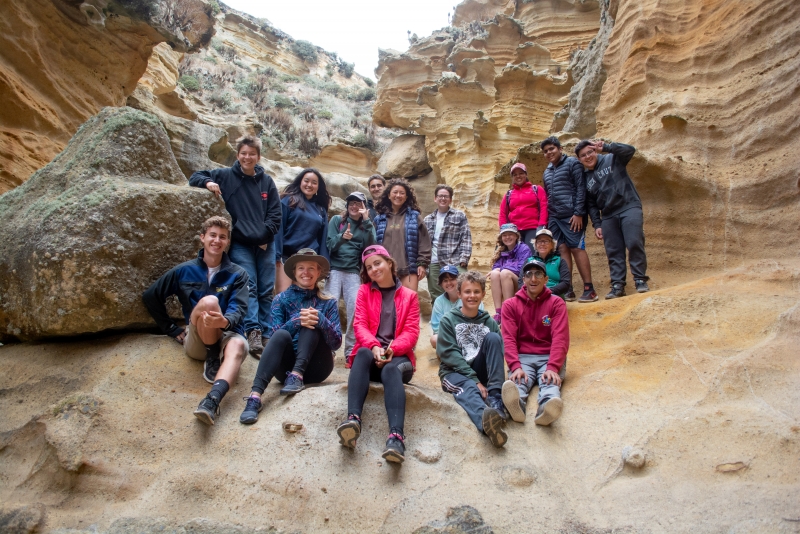 For example, at the end of summer 2019, the 14 current quasars had the privilege of visiting the California State University Channel Islands Santa Rosa Island Research Station (SRIRS), located within Channel Islands National Park. The research station is an interdisciplinary hub for a wide range of guests. When the quasars visited, they shared common spaces with an adult ethnobotany student, two women researching a children’s book about the endemic Island Fox, and a group of artists, students, and teachers engaged in long-term fieldwork to quantify, clean up, and create art from marine debris. In short, the station was fulfilling its mission of supporting a diverse community engaged in studying and managing the natural and cultural resources of Santa Rosa Island.

These fellow guests made an impression on the quasars, whether they were playing the guitar with Quasar Hailey in an impromptu jam session, or just letting their values rub off on the teens. “They really care about the beaches and keeping the environment clean,” said Quasar Nadia about the cleanup team, which hauled over one ton of garbage from the beaches and drainages where marine debris accumulates. “Even though [humans are] doing harm to the environment, there’s another side that wants to keep the environment clean.”

The quasars spent most of their time outside the station, experiencing the island’s unique environment, buffeted by its famous winds. Quasar Lily recalled: “I connected with the wind. When you’re out in the open and it’s hitting across your face, you feel very free from civilization and you can really get in tune with nature.” Her colleague Quasar Stella described being immersed in nature, inflected by the different levels of human impact on the island: “I thought it was very cool how it was all untouched. You’ve got the research station, and then you’ve got the historic ranch, which is a bit older. That’s cool to see: there’s stuff growing on it, and it’s kinda getting consumed by nature. As you go past of that, it’s just raw and real, and there’s so much life.” 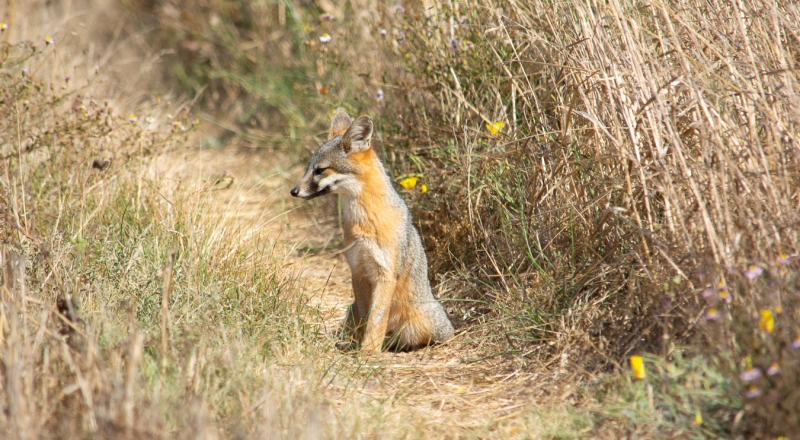 From Island Foxes to bees and Banana Slugs, the students witnessed the island’s special biodiversity. They visited the grove of endangered Torrey Pines, a relictual population dating from the tree’s much larger range during the last ice age. Today, the only other place you can find these trees growing wild is in Torrey Pines State Reserve in San Diego. 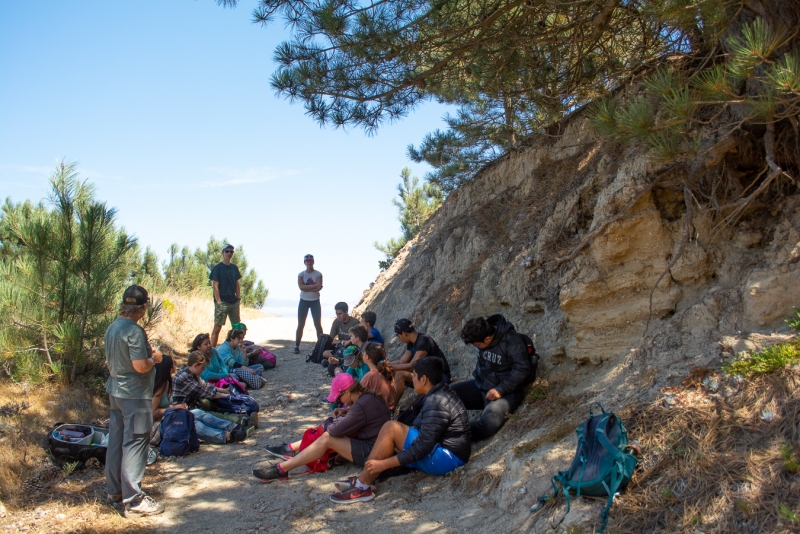 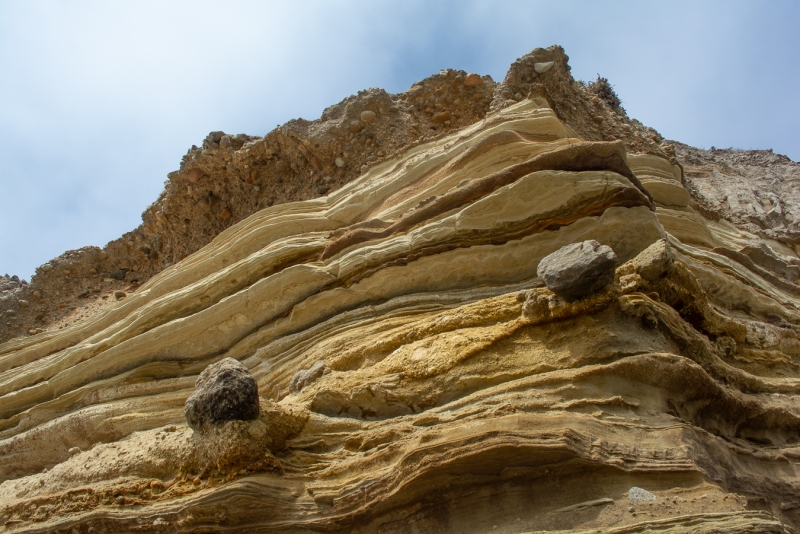 The past as pages in geology’s book: stratigraphy in the bluffs of Becher’s Bay

They hit the beach to learn field biology techniques for sampling invertebrates on a sandy shore, learning methods that are applied internationally by researchers seeking to compare datasets from around the world.

Sampling steps, left to right: 1) mark points to be sampled along a line 2) sample sand and organisms along for the ride with a coring device called a “clam gun” 3) deposit your sample on mesh 4) remove the sand by swishing your mesh in the surf. 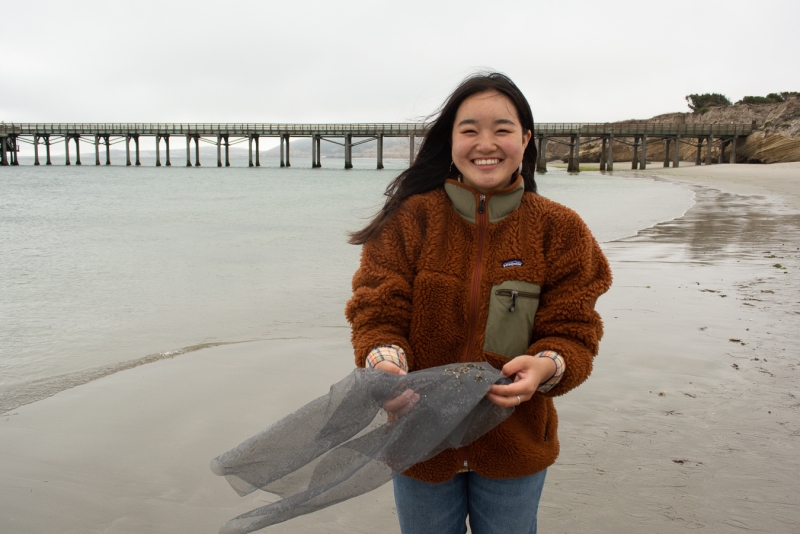 5) Identify and count the organisms remaining in the mesh.

Their guide on the beach—and to the station and island in general—was SRIRS Director Russell Bradley, M.S., whose background is in marine biology. Bradley is no stranger to island work: before assuming this position, he conducted conservation research at Farallon National Wildlife Refuge in the Bay Area for 17 years. As an educator, he’s in favor of giving students the opportunity to learn from their mistakes while the stakes are low. Teens who forget to put important metadata on their datasheets—like their name, the date, and the location—might have to throw out their data for a workshop, but hopefully they’ll never have to learn the same hard lesson once they’re professionals in the field. 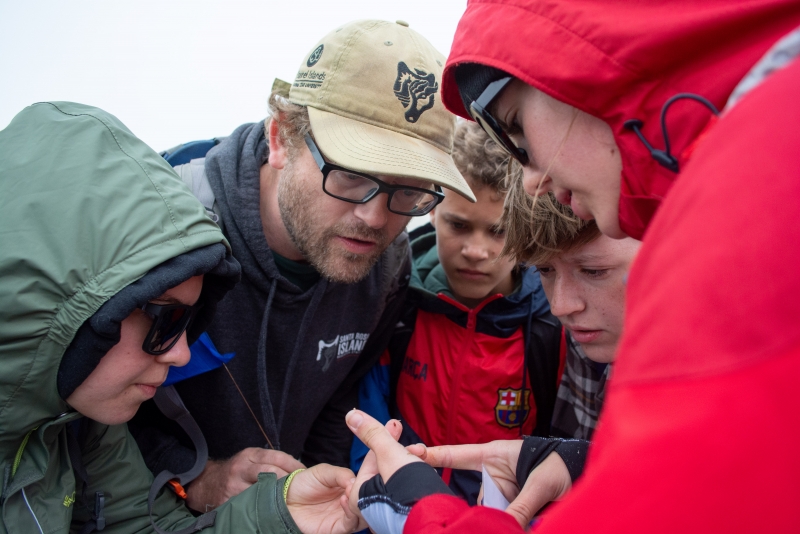 Identifying tiny creatures left behind in the samples, with Bradley's help 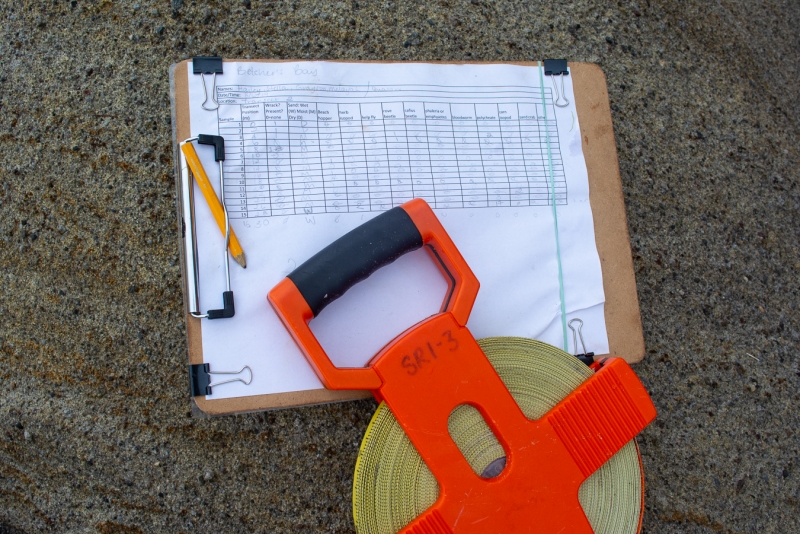 Teen Programs Manager Jenna Rolle, M.S.—who runs the Quasars to Sea Stars program throughout the year—is a paleobiologist who understands the value of getting an early taste of fieldwork. “Getting hands-on experience with scientists in the field is an experience that even undergraduates in college don’t often get. That’s really invaluable. It helps the quasars decide if science is something they really want to pursue.” 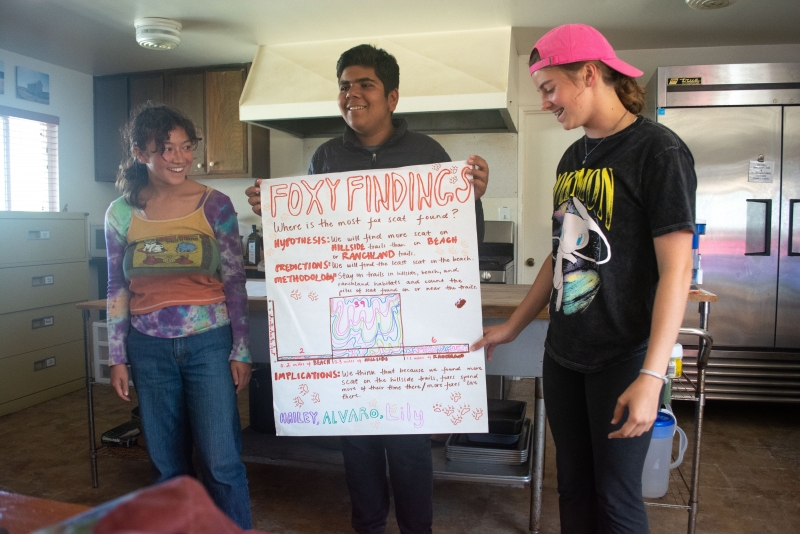 One of two very serious student analyses on the distribution of Island Fox scat. What are you laughing at?

Trips like this one are part of the regular quasar summer schedule, Rolle explains. “It allows them to be out in an environment, hands-on studying the curriculum we’ve been discussing all summer. This summer we learned about our local watershed, so it was important to go out to a place where we could explore a unique setting, a contained watershed, essentially.” 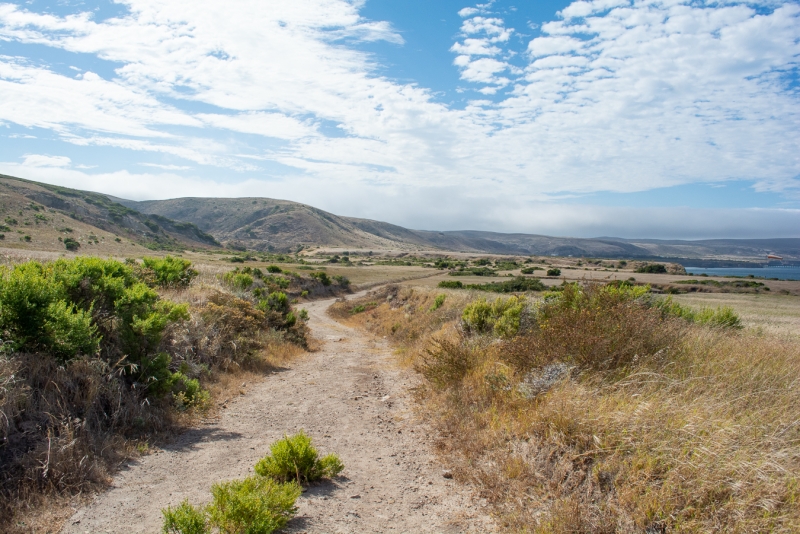 The island is home to a surprising array of habitats with varying amounts of available water. Infrequent rain forces the Torrey Pines at its eastern end and the “cloud forest” of oaks and pines on the island’s heights to rely heavily on fog for water. The island’s wide grasslands—expanded by grazing during its decades as a working ranch—are vibrant with green grass and colorful wildflowers in the brief wet season, and dry and gold through the rest of the year. These can seem barren, but in deep canyons carved by water and wind, the abundance, tenacity, and variety of plants and lichen—not to mention the geology—is dazzling. The hike into Lobo Canyon was a real eye-opener for Quasar Melayah: “First we were walking a couple of miles through barren grasslands on top of the hills, and then we went down into this super-lush, green area. It wasn’t like any terrain I was used to. The rock formations were really cool. That was a really new experience.” 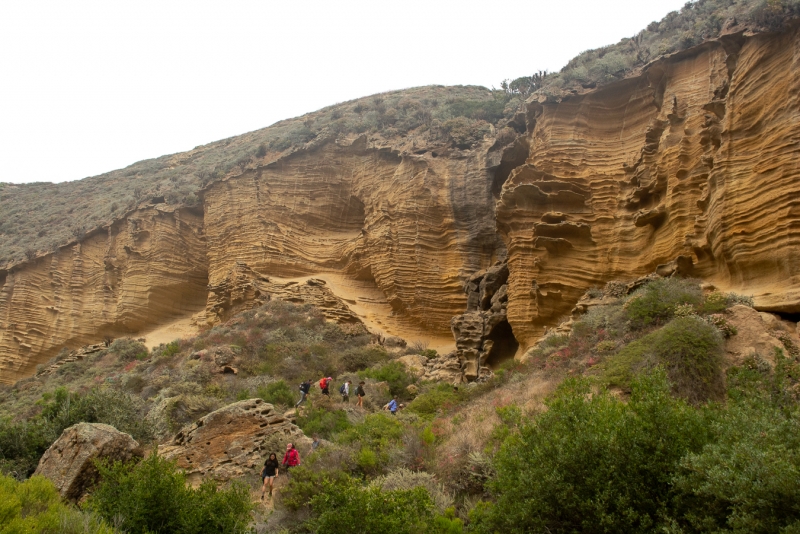 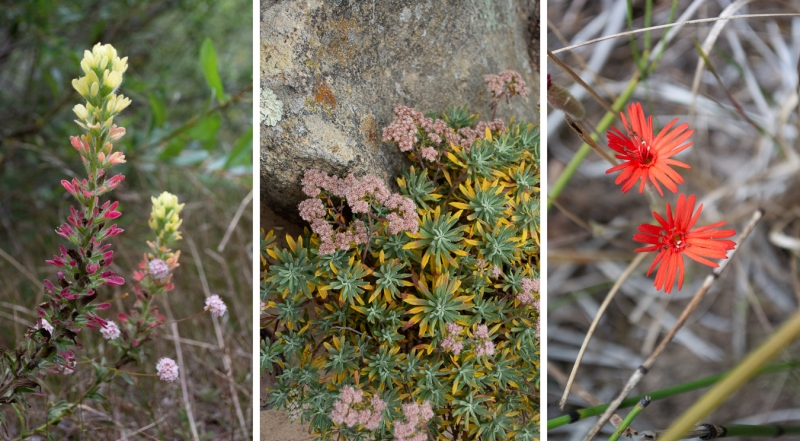 Quasar Grayson recalled the vivid blue-green color of the water in sheltered coves around the island. “It was insanely beautiful. It was like a tropical beach.” He was also a fan of the famous wind: “Some people didn’t like it because it gave them windburn, but I found it really exhilarating.” 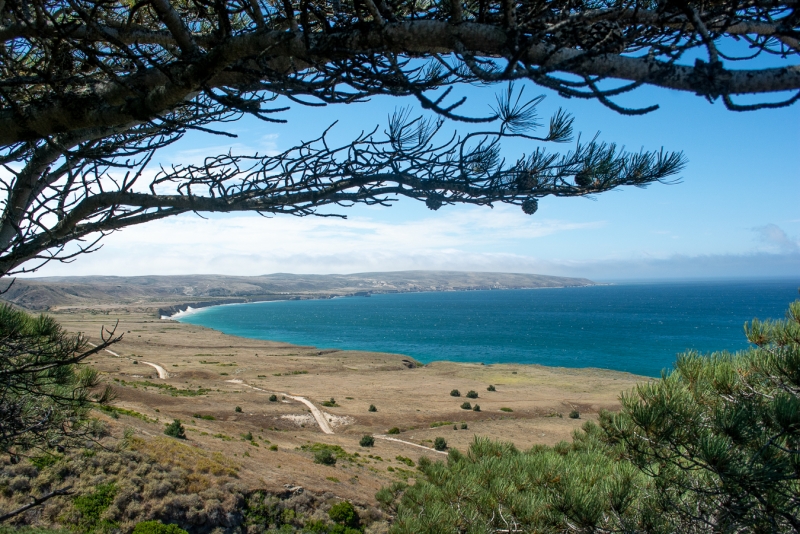 Looking west at Becher's Bay from the Torrey Pine grove 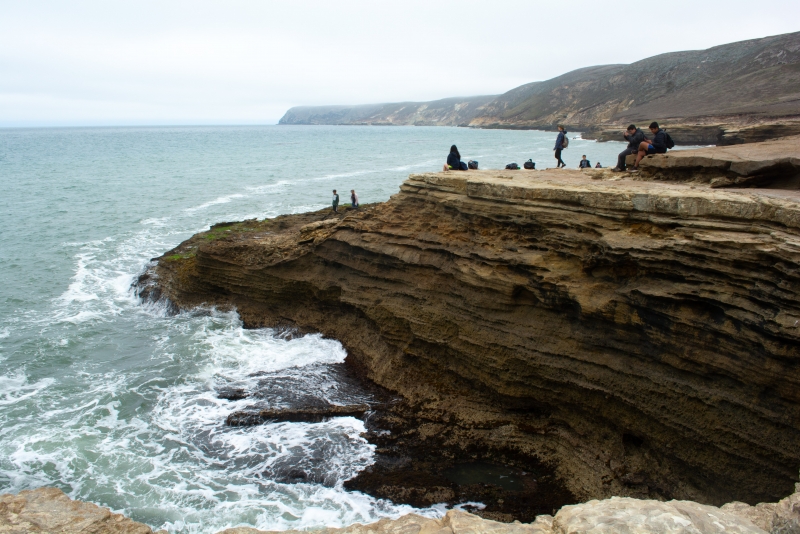 Wild coastline at the mouth of Lobo Canyon

Science aside, a major ingredient of every quasar trip is the opportunity to be real in the absence of the screens and virtual experiences that monopolize our attention in everyday life. The unique combination of unplugging and being in nature has a predictably uplifting effect on everyone’s mood. “It allows us all to spend time together and really bond,” says Rolle. “Because we’re together for five whole days without access to any other technology, the quasars get to know each other really well. They let loose a little bit and are much more willing to talk to adults. They ask a lot of questions that they wouldn’t normally have the opportunity to ask. They seek guidance from people who are in the field they’re thinking about being part of someday.” 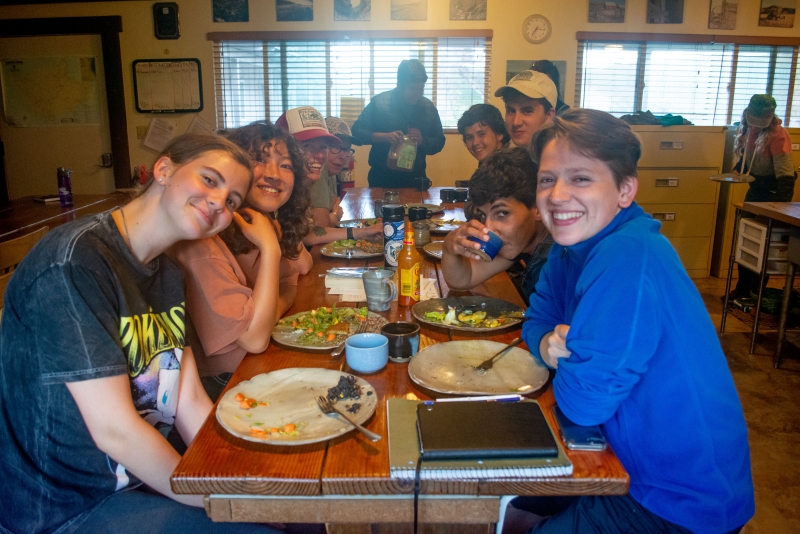 Quasars in the research station’s communal kitchen. Senior quasars led the student teams who cooked and cleaned up at every meal.

One of those people is Librarian Terri Sheridan, who has been connected to the teen program since it began decades ago. Through those years, she’s steered it from the backseat and taken the reins during gaps in leadership. “Terri’s an encyclopedia of a person, so she’s a resource for the quasars to go to,” says Rolle. Back at the Mission Creek campus, Sheridan has spent countless hours mentoring teens in the Museum Library and beyond. Her name invariably appears among those gratefully credited in the slides at the end of quasar final presentations. “I like that teen energy, even when it’s angst,” Sheridan admits. She says the trips provide something unique to the teens in terms of “just being away and discovering things. I think they’re all special trips.” 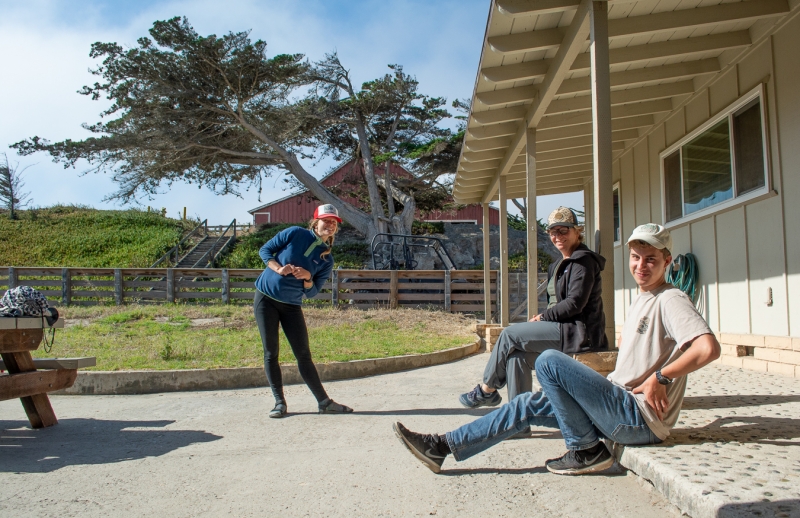 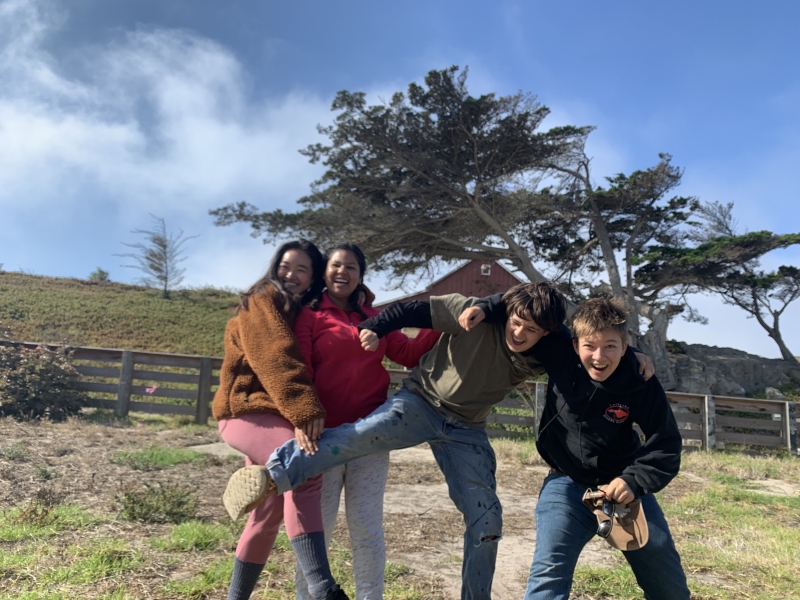 For those newer to the program, the trips offer a refreshing change of pace from the frenzy of junior high and high school activities. “I was in the moment, in the present,” said Quasar Aidan. “I wasn’t worried about the future. I was happy and enjoyed every minute of it.” For the seniors—Quasars Hailey, Ciaran, and Danial—this would be a final opportunity to share this experience with their peers in the program, since it’s their last summer as quasars. 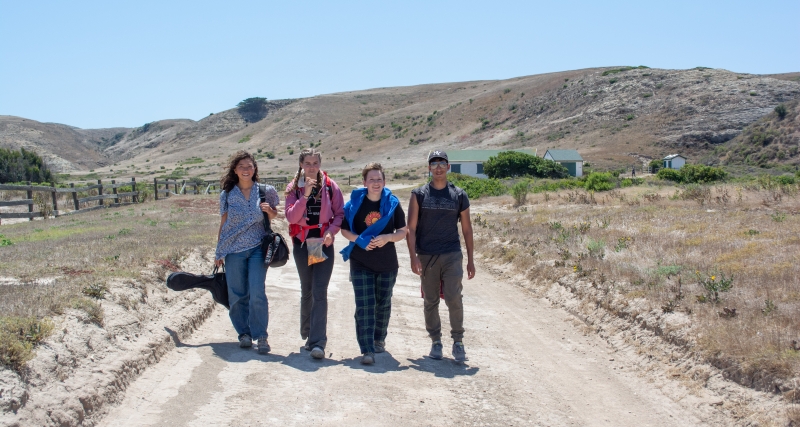 “It was great having Santa Rosa Island be my final trip because it was so beautiful, with a lot of time for thinking and connecting.” recalls Hailey. “I was able to see how I’d connected to everybody over the years I’ve been in this program. It was such a beautiful place to do that. Obviously, being in nature is a great place for inner reflection.” Danial agreed, “It was a great way to end three years of being a quasar.” 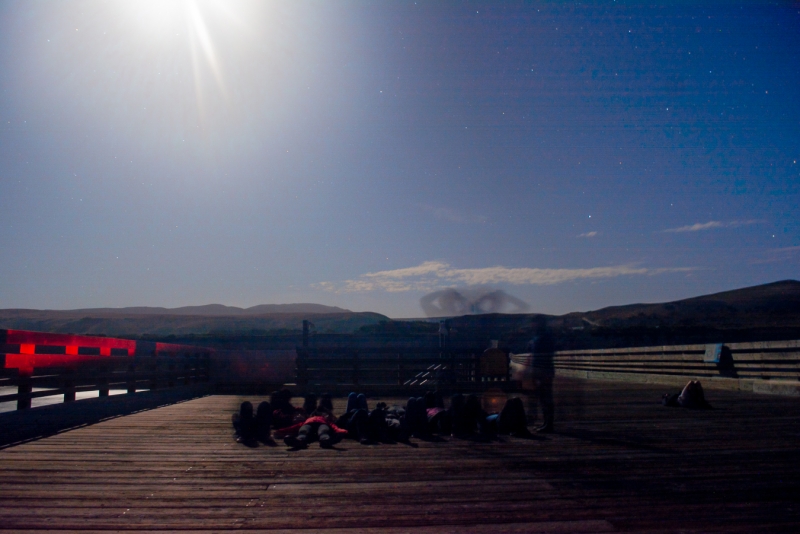 This long exposure of the stargazing group was taken hours after the sun had set. The bright light at upper left is the moon.

On the last night of the trip, they brought a telescope down to the pier, where the horizon was open and the sky abundantly stippled with stars. “Since there were no city lights, you could really see the stars well,” explained Lily. “There was nothing blocking you from getting connected to astronomy. It was awesome.” The quasars—bundled up to resist the wind—lay down shoulder to shoulder, sardine-style on the coarse wood planks, their heads in the center of a cozy double row. While they gazed up at the rest of the universe, Hearst Intern Charlie Thrift gave an impromptu astronomy lecture.

Thrift—who acted as a chaperone on the trip—observed the unique effect of getting away from it all as a group. “Over the course of the week, we got to see the walls come down on each individual person. We were all very genuine. Getting to see these kids in their natural state, away from social media and the stresses of high school, it’s a privilege.” For Thrift, the trip was particularly meaningful because he visited the research station as a quasar himself, just a few short years ago. “To see that what the island meant to me when I was a quasar, still means so much to these kids now…that’s a good feeling, to see that it’s continuing to be a place for this kind of valuable experience.” 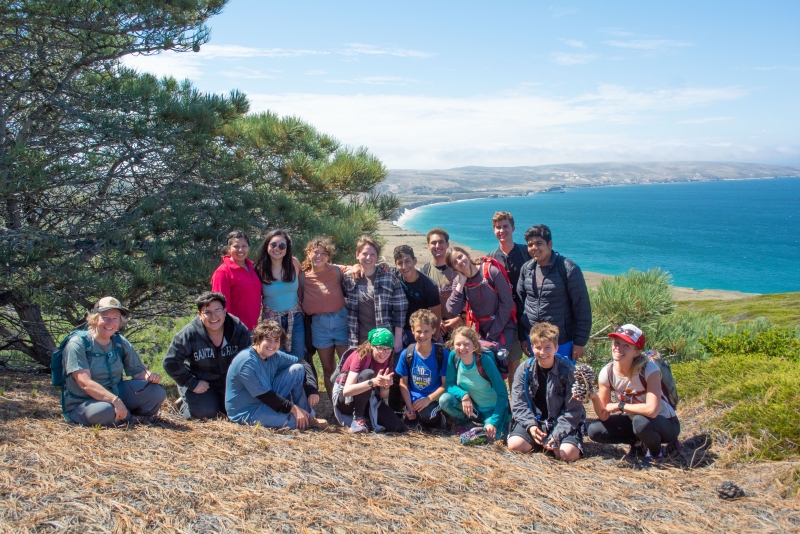 The World is Her Oyster: Micromollusks a...