I want to tell you about some “fool’s gold” that’s worth much more to us than “real” gold.

One of the goals of our upcoming summer show, Rare Earth, is to make you think about the value humans assign to natural objects. The earth science treasures in this show have meant different things to different people over millennia. Because we facilitate research and provide education, scientific value is a priority for us. We’re interested in what we can learn from natural objects, and an object’s capacity to teach is usually not the same as its market value.

Many of the finest specimens in our collections have been donated by collectors who shared that sense of value. Among the dazzling minerals of Rare Earth, we’re featuring a choice handful of ammonites plucked from nearly a thousand donated to our Earth Science Collections by our longtime friend Ed Womack. 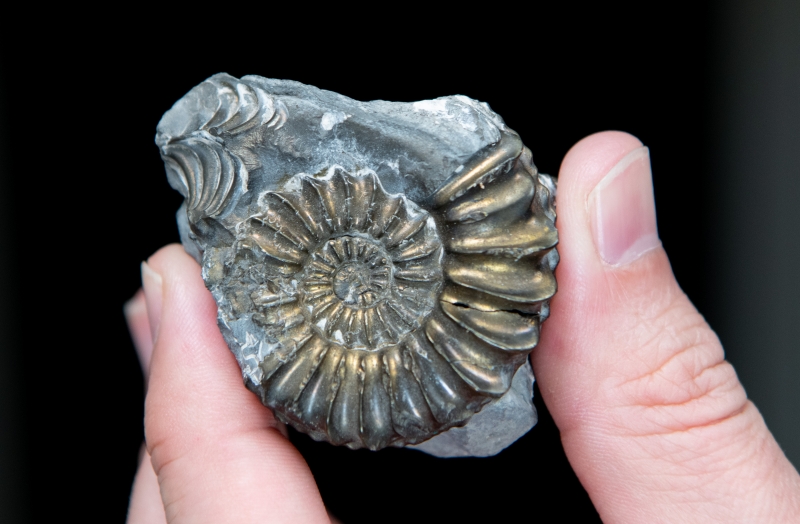 A pyritized ammonoid in the genus Pleuroceras from about 195–190 million years ago. This beautiful specimen donated by Ed Womack to our Earth Science Collections will be on display in Rare Earth this summer, June 11–September 5.

Ed—a Methodist pastor by calling—came to fossil collecting by a route he calls “convoluted”—appropriate for someone who collected so many spiral-shaped objects over the course of his long life.

As an undergraduate at Phoenix College in 1950, he needed to take some science courses that wouldn’t be too math-heavy, so he chose geology. This choice ignited a lifelong interest. Ed recalls: “I started collecting mineral crystals, and my geology professor was adamant that if you’re going to collect crystals, it has to be a scientific collection, and you have to learn to identify and catalog them.” When he left graduate school and couldn't afford to transport all his specimens, he generously gave away his collection to a young student.

In 1964 Ed was assigned to a church on Oahu. “That put me in the middle of the ocean, and I decided to collect seashells,” he says. “I had been without a scientific collection for seven years, so I was hungry for something.” 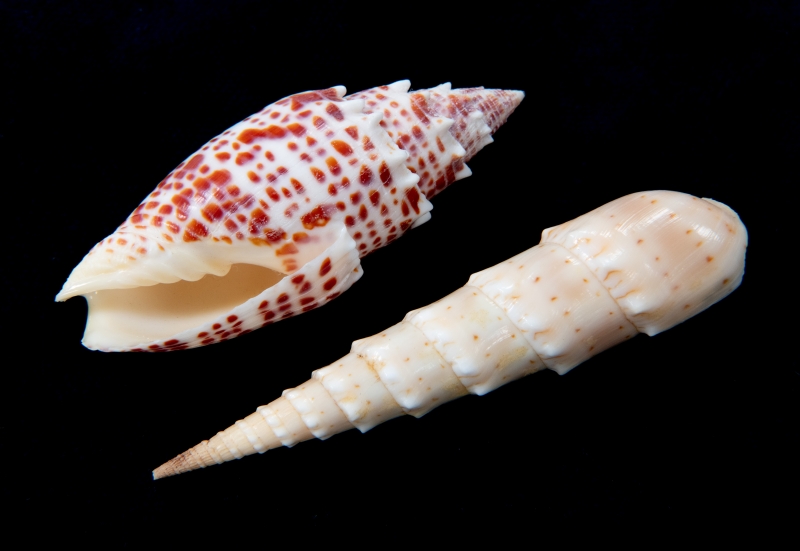 Mitra papalis and Terebra crenulata shells collected by Ed during his time in Oahu. They are among the thousands he donated to our Department of Invertebrate Zoology.

Ed’s diligent drive to identify and document his finds—crystals, seashells, and fossils alike—made him a true scientific collector, not just an “accumulator.” As Dibblee Curator of Earth Science Jonathan Hoffman, Ph.D., notes, Ed’s fossils came to the Museum accompanied by ten binders of documentation, with each specimen bearing an entire page dedicated to its identity and origin: “This is museum-level accession,” Dr. Hoffman testifies. Information about where and how something was collected greatly increases what we can learn from the object, enhancing its value in our eyes beyond beauty or commerce.

The Museum was lucky enough to collect Ed as a friend way back in 1977, when he was appointed to a church in Lompoc. He joined the Santa Barbara Malacological Society, a group of shell collectors and scientists using the Museum as a base for their mollusk appreciation. Ed remained involved with that group—eventually becoming its president—during his 16 years on the Central Coast. Upon retirement, he moved back to Arizona, but he stayed in touch with the Museum. When his shell collection outgrew his house in the early 2000s, he offered it to us, and we gladly accepted thousands of shells he had collected over 40 years.

“I didn’t want to sell my shell collection,” Ed explains, “because I knew it would just be sold off as household décor. I wanted it to go to a museum, if it was of a quality that the museum wanted. And I was very pleased that it was. I felt the same way about the ammonites.” 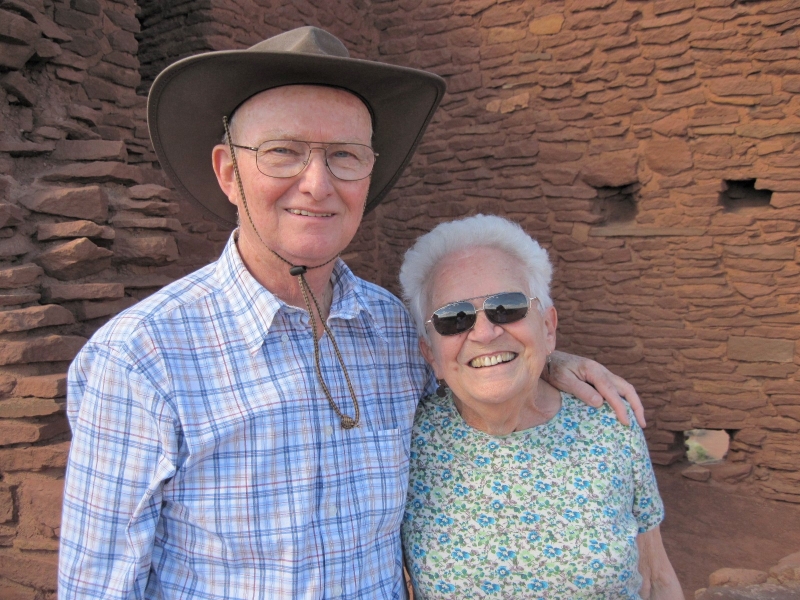 Ed and his wife Jean (at Tuzigoot National Monument)

As a pastor, Ed’s first way to look at fossils and shells is as an example of the beauty of creation: “What a wonderful thing God has made. We can’t make that. There’s no way you can make a seashell.” The commercial value of these objects is not important to Ed. He recalls, “People would come to see my collection and they would say ‘How much is this worth?’ and I would say ‘How much I could sell it for, or what it means to me?’ Those are two very different things.” Knowing the origin stories of the objects—including the efforts of the people who obtained them—is truly meaningful. 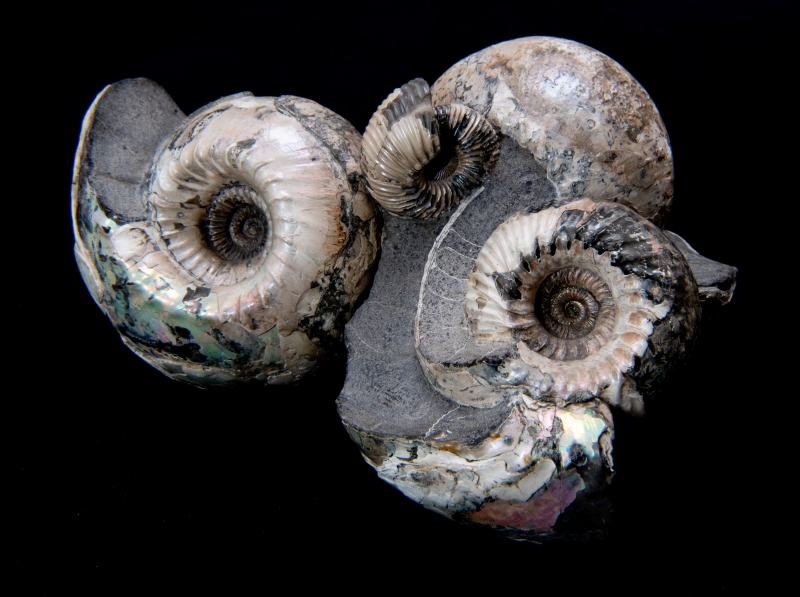 A group of Cadoceras elatmae from about 165–161 million years ago. You can see glistening multicolored iridescence where the outer layer of their shells has worn away to expose the layers of nacre inside.

Ed’s collections mean a lot to us. “This collection is so large and diverse,” says Dr. Hoffman. “It demonstrates some of the really amazing types of fossilization.” Jonathan is “a vertebrate guy” but he says Ed’s ammonites win him over as specimens of rare kinds of transformation: “Invertebrates in particular are great at demonstrating pyritization, where the calcium carbonite minerals of the shell have been replaced with pyrite, fool’s gold. It’s an interesting situation that we believe happens in low-oxygen depositional settings. I’ve always loved going to the Womack collection to demonstrate these different types of preservation.” In Rare Earth, we have a golden opportunity to share specimens which are not only beautiful and commercially valuable, but scientifically instructive, like Ed’s pyritized ammonites.

As Ed says, “There’s a difference between collecting something and knowing what you’ve got.”

We know that in Ed Womack we have a friend with a heart of gold, no fooling. We’re honored to benefit from his generosity.