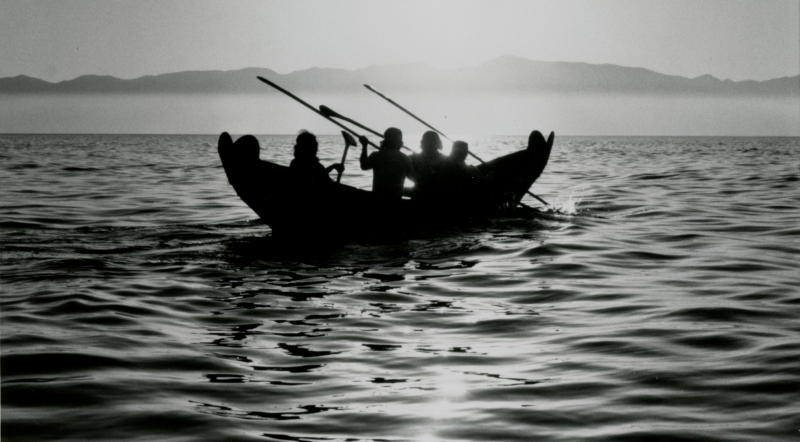 How big was the tomol and how was it made?

The plank canoe, or tomol, was eight to 30 feet long and was made using driftwood or redwood. The heavy one-piece floor had three or four rows of planks added to build up the sides. Each row of planks was glued in place with yop, a melted mixture of pine pitch and hardened asphalt. After this glue dried, each plank was fastened to the one below by drilling holes on each side of the seam and tying the boards together with plant fiber string made from Indian hemp. The holes and seams were filled with more hot yop. Sanding was done using sandstone and finished with shark skin. Last, the canoe was painted and decorated.

How do we know about building the plank canoe?

The last Chumash tomols used for fishing were made about 1850. In 1913, an elderly Chumash man, Fernando Librado, made a tomol for an anthropologist, John P. Harrington, to show how they were built. He had seen the last tomols being built when he was a young man. This boat is now on exhibit in the Indian Hall at our museum. In the past twenty years several Chumash tomols have been made using John Harrington's notes to guide their construction.

How many people could fit in a canoe?

The typical plank canoe held a crew of three people. Large canoes could carry as many as ten people. One member of the crew would act as bailer because seawater often seeped into the tomol. Sometimes a young boy served as bailer.

How long did the canoes last?

We don't really know how long Chumash canoes might last after they were built. It probably depended on how often they were used and how much wear and tear they experienced. The Chumash kept their tomols in a moist place in the shade until they were ready to go out to sea. They would check the canoe carefully and make any needed repairs. They took good care of the tomol so it would last as long as possible.

Baskets played essential roles in all aspects of Chumash life -- for gathering, storing, preparing and serving food, holding water, keeping money and other valuables, measuring acorns for trade, carrying babies, in gambling, as gifts, and for ceremonies. Even the Chumash house was much like an upside-down basket.

How did the Chumash make their baskets?

The Chumash used both twined and coiled weaving techniques. It is for their beautiful coiled baskets -- trays, bowls of all sizes, treasure baskets and hats -- that the Chumash are most renowned. The coiled baskets have a spiraling foundation of three slender rods of juncus rush, wrapped and sewn together with split strands of the same material.

Twined baskets include leaching basins, sieves, fish traps, cradles, and water bottles. Most were made from whole juncus rush stems or split tule (bulrush). These were woven by twisting weft strands around rigid warps that radiated from a central point like spokes on a wheel.

Where did the colors come from?

The baskets are usually natural straw tan in color, with designs in black. The juncus stalks were dyed black by burying them in dark mud, or by soaking them in water with acorns and a piece of iron. The natural reddish-orange base of some stalks was used separately to fill in designs, or even as the entire background color.

What kind of designs did they use?

Chumash basket designs are easy to recognize. Most have a "principal band," a sort of border about an inch wide, below the rim. Below that, designs may include vertical bars, horizontal bands, zigzags, stepped lines, or an all-over network pattern. Some of the geometric design elements have names: Little Deer, Arms (called Quail Plumes among other tribes), Points, and Butterfly. The Chumash rarely wove rattlesnake designs and did not put pictorial figures of humans or animals on their baskets. Small blocks of alternating dark and light stitches called "rim ticking" frequently provide the finishing touch on the last row.

Is it true their baskets held water?

The Chumash wove their coiled baskets tightly enough to hold water, and they even used some to cook in! Water or soup stirred in a basket along with heated rocks would soon boil.

Twined basketry bottles were less tightly woven but were coated on the inside with asphaltum to make them watertight. To do this, the Chumash powdered hard tar and put it into the finished bottle along with small heated stones. They shook and rotated the basket to melt the tar until the inside of the basket was covered with it; then poured out the rocks. They filled the basket with water and left it overnight to cure before refilling it with fresh water.

Why are the Chumash famous for their baskets?

The Chumash have long been known for their excellent baskets and exported them to other tribes even in pre-European times. Spanish explorers, later visitors, and settlers greatly admired Chumash baskets, which they sent as souvenirs to family and friends in all parts of the world. Extraordinary baskets, with coin designs and Spanish words woven with over 220 stitches per square inch, were made in mission times. The skilled, adaptable Chumash continued to produce baskets despite the cultural upheavals of history, until the last old-time weavers died around 1915.

Where can I see Chumash baskets?

Is anyone making Chumash baskets today?

Modern weavers have closely studied dozens of these baskets, pored through John P. Harrington's early interviews with basketmakers, learned to work with wild plant materials, and gained strength from the knowledge that they are bringing ancient traditions back to life. We are happy to see these baskets serving as inspiration for new generations of Chumash weavers and to know this art will live again long into the future. 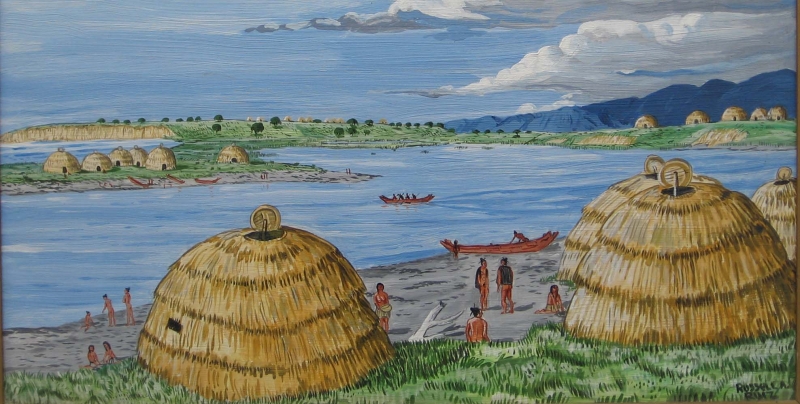 How did the Chumash build their houses?

The Chumash house, or 'ap, was round and shaped like half an orange. It was made by setting willow poles in the ground in a circle. The poles were bent in at the top, to form a dome. Then smaller saplings or branches were tied on crosswise. To cover the outside, bulrush or cattails were added in layers starting at the bottom, each row overlapping the one below. Like shingles on a roof, this thatched covering kept out the rain. For air circulation a hole was left in the top, which was covered with a skin when it rained. In good weather the cooking was done outside, but when it rained a fire could be lit in the fire pit in the center of each house. This also provided warmth. The houses were 12-20 feet in diameter. The chief's house was up to 35 feet across. 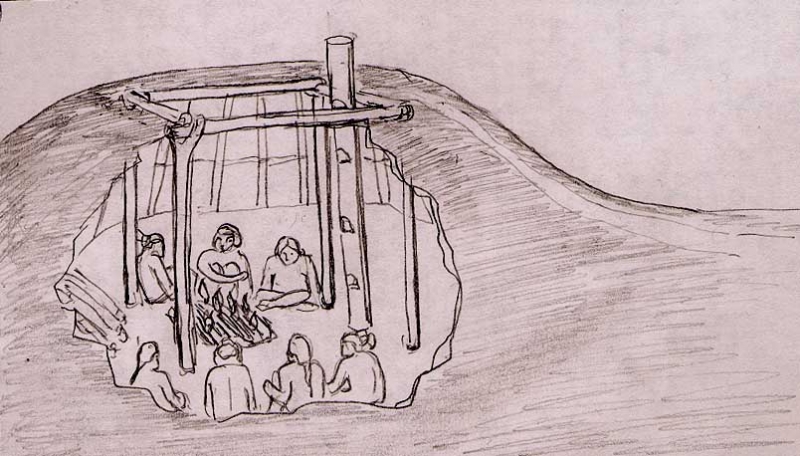 The sweathouse, or 'apa'yik, was used to cleanse the body. Built partly underground and mostly used by men, the sweathouse was entered through a ladder in the roof. A fire was built inside to heat stones to keep the air very hot. People would sit in the sweathouse for a while, then go outside and jump into the cool water of a nearby creek, and then return to the sweathouse for a few more minutes. Herbs were burned in a central fire pit to hide the hunter's scent before he would hunt deer. This was done for health, for cleanliness, and for purification. Large sweathouses also served as men's meeting places. Another name for sweathouse is temascal, a Spanish word derived from Aztec.

What was their money made out of?

The bead money was usually made from small disks shaped from the Olivella shell (also called the Purple Olive, a marine snail). The Indians who lived on the Channel Islands specialized in making the bead money, or 'anchum. They were the mint for the Chumash Indians who lived on the mainland. The name Chumash comes from the name that the mainland Indians gave to the island Indians. Chumash and 'anchum are related words, so apparently the name Chumash originally meant something like bead money makers.

What was their money worth?

What kind of clothing did the Chumash people wear?

For everyday the Chumash didn't wear much clothing. Women usually wore a two-piece skirt of deer skin or plant fiber. It hung to about knee length and had a narrow apron in front with a wider piece that wrapped around the back. Men and boys wore nothing at all, or sometimes a belt or a small net at the waist for carrying tools they might need.

In cold weather, people might wear capes of animal skins for warmth. A chief often wore a waist-length bearskin cape as a sign of his special status.

For festival occasions, the Chumash wore more body paint and jewelry. Dancers and singers at ceremonies had special outfits with feathered skirts and headdresses. 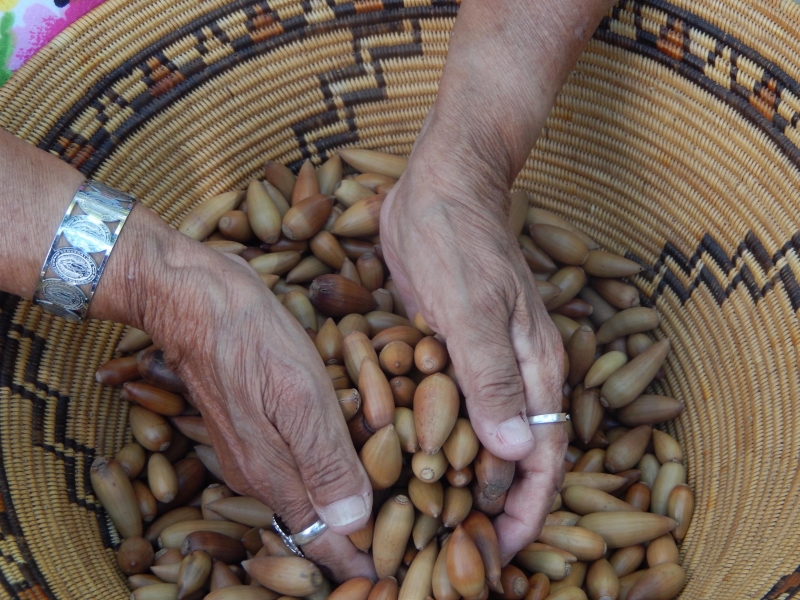 The Chumash homeland offered a wide variety of food supplies. Their livelihood was based largely on the sea, and they used over a hundred kinds of fish and gathered clams, mussels and abalone.

The Chumash ate many kinds of wild plants and traded some among themselves. They also hunted both small and large animals for food. They did not plant corn or other crops as Indians elsewhere did.

The Chumash roasted meat and fish over the fire and made shellfish into soup. Acorns, the most important plant food, took a long time to prepare. Dried, shelled acorns were ground to a powder with a stone mortar and pestle.

The bitter tannic acid was removed by pouring water through the meal. Finally, the acorn flour was mixed with water in a tightly woven basket and cooked with red-hot stones placed into the liquid. While stirring the mixture, the liquid soon boiled and thickened. The Chumash ate this acorn soup with every meal. Other seeds were toasted and ground to a paste. 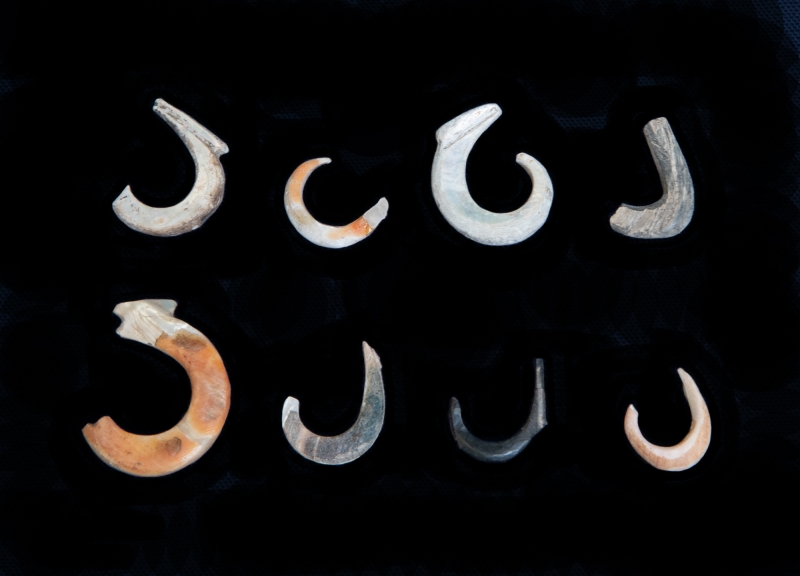 What kinds of weapons, hunting tools, and fishing gear did the Chumash Indians use?

The Chumash used the bow and arrow beginning about 1,500 years ago. Before that, they used the spear thrower. They also used a harpoon with a detachable foreshaft for spearing large fish. They made curved, circular fishhooks from abalone and mussel shells for catching smaller fish.

What tool was the most important one for the Chumash?

It is hard to say which tool was most important, because so many tools were used in their daily lives and all were useful. One of the most important tools was their plank canoe called the tomol. Tomols were used in ocean-fishing and to travel back and forth between coastal towns. These watercraft also were very important in trade between the islands and mainland.