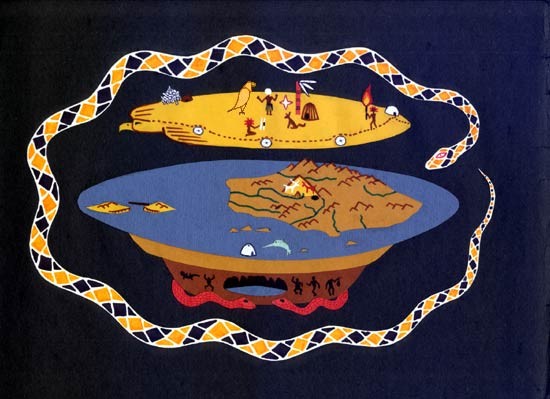 Stories, myths, and legends are a universal characteristic of human cultures. They were passed on verbally from one generation to the next for thousands of years before the advent of written language. Tales were told around the fire in the evening for entertainment, and in the process they also served to teach children the social standards and history of the group. Some were adventure stories, some were funny and others were explanations of natural phenomena and features of the environment. Many of the most interesting and beautiful Indian legends are about the sky.

The Sparks of The Sun

The Sun carries a torch of tightly rolled bark to light the world. After his daily journey across the sky, he snaps his torch to throw sparks which are the stars.

The Boys Who turned to Geese

Long ago, when animals were people, there was a little boy whose mother and stepfather wouldn't give him anything to eat, though they had plenty for themselves. So the boy went off to find his own food and met another boy who was also abandoned. Raccoon came along, felt sorry for the two boys, and helped them dig roots to eat. In the next few days, five more hungry abandoned boys came by, and they all went to stay with Raccoon in the temescal (sweathouse). Finally they decided to go north and take Raccoon with them. So they sprinkled themselves with goose down and sang songs. For three days they went around the temescal, singing and rising higher and higher off the ground. But Raccoon couldn't fly even though he was covered with goose down. All the mothers came to see the boys and begged them to come down, but they refused. They all turned into geese and flew away to the north, to become the seven stars we call the Pleiades. And when geese cry, they sound just like a little boy.

There is this world in which we live, but there is also one above us and one below us. There are two serpents that hold our world up from below. When they are tired they move, and that causes earthquakes. The World above is sustained by the great eagle. He never moves, he is always in the same spot. When he gets tired of sustaining the upper world, he stretches his wings a little, and this causes the phases of the moon. When there is an eclipse of the moon it is because his wings cover it completely. And the water in the springs and streams of this earth is the urine of the many frogs who live in it.

Zaca Lake was formed when Thunder sat down there and made a great hole in the earth. There was once a village there, and one day, a man saw Thunder and said insulting things to him. The rest of the people ran away in fear, and when they looked back, the man was gone and there was water where Thunder had sat down.

There are two brothers who live in the upper world. They sometimes play the hoop-and pole game. One rolls the hoop and the other runs after it and tries to pierce it with his pole. That is what causes thunder. Also they can throw a light they have to make lightning, and when it hits the ground it makes flint. 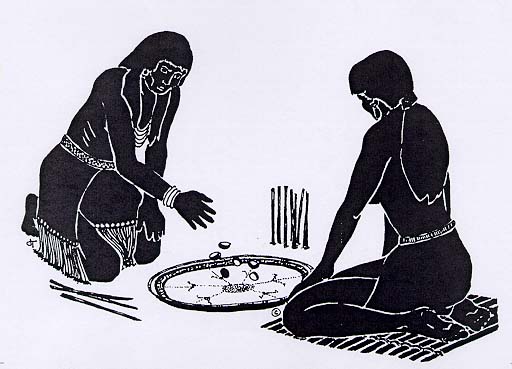 The Chumash had two types of games: games that required skill to play, and games of chance. They often gambled on the outcome. Each village had a special area, called malamtepupi, where games were played. The ground there was made level and smooth, and a low wall surrounded the playing area.

Hoop and Pole or payas, was very popular among Chumash boys and young men. A ring or hoop made from a willow twig wrapped in buckskin, about four or five inches in diameter, was rolled along the ground in a straight line. To one side and about twelve feet away, the player armed with a six-foot long wooden spear waited for the ring to roll by. At the proper time he would throw the spear, aiming for the center of the ring. Spearing the ring was worth one point. There could be two or more players, and when one of them had twelve points, the game was over. A variation of this game was to shoot an arrow through the ring as it rolled past.

Still popular among Southern California Indians, peon or 'alewsa was a game commonly played by the Chumash. There are two teams of two or more players each. Each of the players of one team has one black and one white short stick or bone, which they hide in their hands. After hiding the bones, the hands are brought in front and the arms folded.

The purpose of the game is to prevent the opponents from guessing which hand the white bone is in. The opposing team has a "killer" and it is up to him to guess by bending his head in the direction of the hand that he thinks holds the white bone. He does this for all of the players. If he guesses right the umpire gives him a counter stick. His team then hides the bones for the other side to guess. If he guesses wrong, he receives no stick. The game is played until all the counter sticks (as many as fifteen) are in the possession of one side, which is then declared the winner.

One of the most popular of team sports among the Chumash was tikauwich, or shinny. During large ceremonial gatherings, an entire village might play against another, with as many as two or three hundred players on the field. The game required a square playing area of about 300 yards on a side. Each team had facing goal posts, and the players were armed with shinny sticks, much like hockey players. The object of the game was to put the small wooden ball through the opponent's goal post by striking the ball with great force. Women seldom got into fights during the game, but men often fought to blood. The Ventura Indians had a great reputation as shinny players. It was the custom for the winning side to give half of the money it won in betting to the chief of the village hosting the fiesta. In that way they helped to cover the costs of the ceremony. 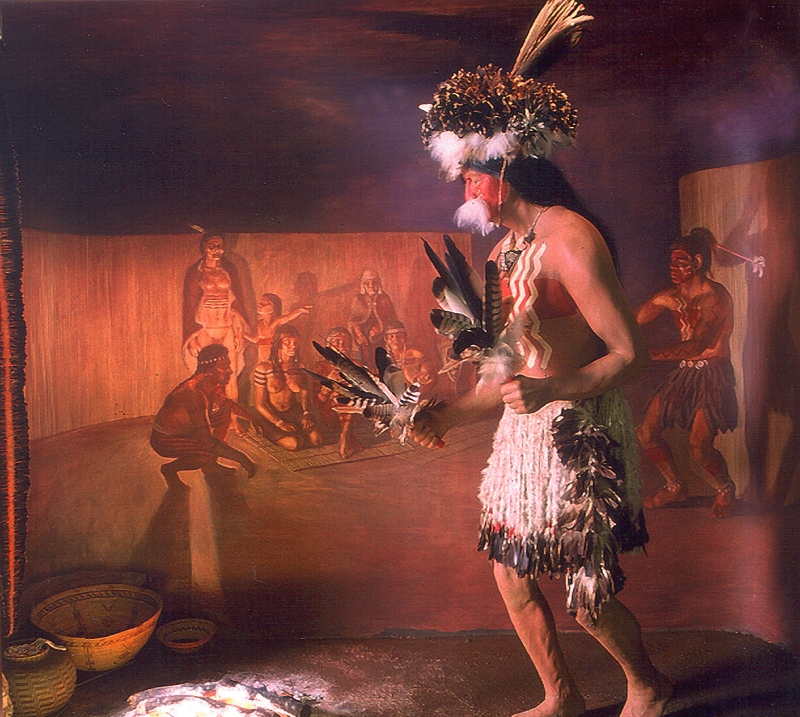 Ceremonial fiestas were attended by people from many Chumash towns. At these gatherings, dances were performed that honored the creatures in the Chumash world. The Bear, the Blackbird, the Fox and the Coyote all had their own dances, as did creatures of the sea like the Swordfish, the Barracuda and the Seaweed. Dancers wore special regalia and body paint for each of these dances, and there were particular songs that went with each one. Many dances were performed just for fun, but some had important religious significance.

What was the most important dance?

The Swordfish Dance was one of the most important held at ceremonies. The dancer wore an actual swordfish skull decorated with shell inlay, or a headdress to symbolize the "sword." The Swordfish was given offerings of beads and other gifts because he was believed to be the chief of all the sea animals. When whales were stranded on the shore, they were said to have been driven ashore by Swordfish as food for the people. In fact, swordfish sometimes are known to attack whales, so this Chumash "myth" was founded upon direct observation.