Sukinanik'oy, in the Barbareño Chumash language, means "bringing back to life." This garden was established by the Museum working with Chumash people to preserve traditional plant knowledge.

More than 150 species of wild native plants provide food, medicine, clothing, shelter, basketry, and tools for the Chumash people. In this garden beside Mission Creek, you can see many of the plants important in Chumash culture, both past and present.

Sukinanik'oy Garden was made possible by the Garden Club of Santa Barbara and gifts in memory of Dawn Hattenbach.

The Chumash ancestors knew each plant well—its appearance, location, season, properties, and uses. They knew that many plants were poisonous and must be used carefully. Each plant had its own name in the several Chumash languages spoken in different parts of our region, including Barbareño, Ineseño (Sʰamala), Ventureño, Cruzeño (Island), Purismeño, Obispeño, and Cuyama.

This garden is an educational resource for all guests interested in gaining a fuller understanding of traditional Chumash culture and its deep relationship with this land. The Chumash names and other cultural information provided in the garden come primarily from the testimony of Chumash Elders Luisa Ygnacio, Lucrecia García, Mary Yee, Juan Justo, María Solares, Rosario Cooper, Fernando Librado Kitsepawit, Simplicio Pico, and Candelaria Valenzuela, as recorded in the field notes of John P. Harrington from about 1911 to 1961.

The information preserved by these elders informs the relationships between Chumash people and these plants in the present day. These relationships build cultural connections, resilient and sustainable ecosystems, regional food security, and tribal food sovereignty. Although the garden serves as a harvesting site for contemporary Chumash people, it is not intended as a guide to collecting or using wild plants, nor is it intended as a source of medical advice. Use of the wrong plant or even the right plant in the wrong way could result in undesired effects, including death. Overharvesting of wild plants harms ecosystems and Indigenous cultures. We encourage anyone who wishes to use these plants to grow their own, rather than harvesting material from the wild . This garden is a great starting point for beginners; we hope it inspires you to begin a lifelong journey of deepening understanding of local cultures and plants.

Underground runners or rhizomes of sedge provided important basketry material used by the Northern Chumash. The best roots are produced by frequent digging in managed beds.

Botanists today group smooth-skinned currants and spiny gooseberries together, but in Chumash languages they have different names. The Chumash ate the small, seedy fruits of several species of currants and a few kinds of gooseberries.

The Chumash framed houses with cottonwood poles and made containers from the wood. They twined the bark into skirts and bathed bruises in cottonwood bark tea.

The Chumash had vivid descriptive names for many plants they did not use. This Barbareño name means “frog’s loincloth,” a fanciful reference to the small, narrow leaves.

Roasted in pit ovens or in hot ashes, the small, starchy underground corms provided an important food for the Chumash. Harvesting with digging sticks loosened the soil, leaving behind small offsets that grew into new plants for the next year.

Resembling wild honeysuckle in growth habit, bush penstemon shared its Chumash and Spanish names. Honeysuckle was made into poultices, medicinal tea for colds, and a wash for sores and wounds.

Black walnuts are hard to open but good to eat. The Chumash split the nuts in half to make dice for pɨ, a gambling game. They made a tea from the leaves to drink for the blood, and they sometimes wrapped the rims of twined baskets with walnut bark.

The leaves were applied as a powder or wash to treat cuts, sores and sprains. The Chumash called many red-flowered plants by this same descriptive name, which means “hummingbird sucks it.”

The Chumash divided the many native Ceanothus species into two categories: blue-flowered or white-flowered. Cocoons of Ceanothus Silk Moth, sometimes found on this plant, were prized for making rattles.

With the straight, hard wood of chamise shoots, the Chumash removed the pithy heart of elderberry sticks to make rattles and whistles. They also made arrow foreshafts, clam-gathering sticks, and snares from chamise. Women drank a medicinal tea of the leaves.

Redwood trees are not native to the Chumash region. The Chumash used driftwood logs from northern California for making the tomol, or plank canoe, and canoe paddle blades. This wood was easily worked and resistant to decay and insects.

For purification in blessings and ritual offerings, the Chumash sprinkled water from bundles of the leafy tips and placed them at shrines. They treated headaches and paralysis with sagebrush, and also made windbreaks and various tools from the branches.

Carrizo grass was the most important plant for arrow shafts. The Chumash thatched their houses with the leafy stalks. Dry stalks were split to make sharp knives or used whole in splints for broken bones. Aphid secretions on carrizo stems were a sugary delicacy.

These stalks grow in clumps like Spiny Rush but are much slenderer and more flexible. They may have been used as foundation material for very finely coiled baskets.

These branch tips were sometimes used to brush the tiny spines from cactus fruit. Chumash people have considered the boiled leaves of this plant to be a good remedy for poison oak rash.

Although some Chumash said California Buckwheat was called poléo, most Native peoples applied that name to aromatic Monardella, an important medicine for stomach trouble, rheumatism, and irregular menstruation.

To enhance the black color of mud-dyed juncus strands, Chumash basket weavers buried them between layers of fresh deerweed over hot coals. The branches were used as brooms to clean out ovens in mission times.

Many members of the nightshade family are toxic, but the Chumash ate the fruit of this species both raw and boiled. The leaves and berries, crushed and mixed with salt, were applied to relieve poison-oak rash. Boys tattooed each other using cactus thorns and juice from mashed nightshade leaves.

Botanists today group smooth-skinned currants and spiny gooseberries together, but in Chumash languages they have different names. The Chumash ate the small, seedy fruits of several species of currants and a few kinds of gooseberries.

“Jackrabbit’s ears” is the common name of this plant in Chumash languages and Spanish. It was used to treat coughs and colds, digestive troubles, bruises and wounds, and as a general tonic, hair rinse, and in feminine hygiene.

The Chumash used this strong, red-colored wood to make digging sticks, pry bars, awls and wedges; for building fences; and for offertory poles at shrines. Ceanothus flowers, when rubbed with water, make a fragrant soapy lather for washing.

The white juice from the flower heads of gum plant was used in the Chumash area to treat skin diseases, poison oak rash, and lung troubles.

The Chumash boiled cherry seed kernels for a long time in several changes of water to remove bitter, poisonous cyanide. The cooked seeds were mashed and molded into balls that were a prized food, trade item, and ritual offering.

The Chumash used dried horsetail stems like sandpaper for polishing fine wooden bowls. They considered the stems and roots to be medicinal, took them as a purgative, and sometimes substituted them for similar-looking but harder-to-obtain Ephedra.

To relieve lung ailments and rheumatism, the Chumash boiled the leaves and drank the liquid or bathed in it. Fresh leaves were rubbed on the body to treat illness caused by sorcery.

This is the most important fiber plant of the Chumash, who twisted the strong, reddish fiber from the stalks into rope and string for fishing and harpoon lines, fishnets, bags, clothing and dance regalia.

Datura is the most important medicinal and religious plant of the Chumash. They used it to relieve pain, restore spiritual harmony, and strengthen connections with the spirit world. All parts of this plant are poisonous, and the Chumash respected the dangers involved.

The Chumash pounded the berries and dried them in the sun. With an abalone shell, they separated the chaff from the dry, pulverized berries and ate them uncooked. Some other California peoples soaked lemonadeberry fruits in water to make a beverage.

Many Native California peoples ate the succulent leaves raw in spring, but the Chumash more often cooked them like spinach. The small, black seeds were also a traditional Chumash food.

To treat wounds, skin lesions, and rheumatism, the Chumash molded the fuzz from dry mugwort leaves into small cones, which they placed on the skin and set afire. Today this plant is used to treat poison oak rash.

The Chumash twisted the stem fibers to make soft, white-colored cordage for carrying nets and straps, cradle bands, men’s belts, and dance skirts. They allowed the milky sap to congeal and chewed it like gum, but also used it to sicken an enemy.

Poison oak sap was considered to be the most effective remedy for warts, skin cancers, and other persistent sores. The Chumash applied powdered leaves to stop bleeding and heal wounds. To treat dysentery, tea made from the roots was cooled before drinking.

The small, shiny black seeds were toasted and ground for food. They were a highly desirable Chumash trade item and important in ritual offerings. The Chumash ensured adequate supplies by regularly burning the grasslands where it occurs.

Branches were tied in bundles to make brooms and brushes. The Chumash made twined utility baskets and toy arrows from the stems, and children sometimes ate the white, insipid fruit. The Ventureño and Spanish names describe the leaf as “mouse’s ear.”

This plant has a long, slender, hard root that was scraped for use in washing hair, skin, or clothing. To induce vomiting as a treatment for consumption, the Chumash drank a tea made from this root followed by drinking tea of Yerba Mansa for three days.

Many Chumash twined baskets are made from the whole stems of this plant: trays for leaching acorn flour, tar-lined water bottles, and baskets for gathering and carrying. This Chumash folk category may also include Juncus effusus and Juncus patens.

The Chumash made utility baskets in twined or wicker weave from whole shoots of sumac or willow. They also split and peeled sumac shoots to make a pearly white sewing material for design accents in their fine coiled baskets.

Highly valued by many Native American and Hispanic peoples, this aromatic root was an important ingredient in medicinal teas to purify the blood, wash cuts and infected sores, and treat rheumatism and cough.

The Chumash gathered the red fruits in winter, heated them, and allowed them to stand for a few days before eating. Toyon’s hard wood was made into bows, arrows, awls, hooks, harpoons, digging sticks, wedges, containers, dance hairpins, and offertory poles.

Tea made from this fern was drunk to treat blood and liver disorders, menstrual problems, difficult childbirth, and stomach trouble.

The Chumash dyed string a red-brown color by soaking it in alder bark solution. They carved the wood into bowls, trays, and spoons.

Chumash people lined acorn granaries with the leaves to repel insects, peeled and ate the young stems, and used the plant to treat headaches and induce vomiting. Today they burn dried bundles of white sage as a purifying incense at ceremonies.

The Chumash considered wild blackberries to be a delicacy but thought that those growing in damp places were unwholesome. Tea of boiled blackberry roots was taken for dysentery.

Slender stalks of this species form the three-rod foundation of Chumash coiled baskets. This Chumash folk category may also include small plants of Juncus textilis.

The Ventureño Chumash name means “medicine.” Local Indians and settlers used this plant as a tonic, stimulant, disinfectant, and treatment for gangrene. They said the wild plant was more effective than garden rosemary, also called romero in Spanish.

The Chumash have long valued yerba santa for its medicinal use in relieving colds, cough, fever, chest pain and foot pains, and as a general tonic. Spanish missionaries named it “holy herb” because of its medicinal properties. 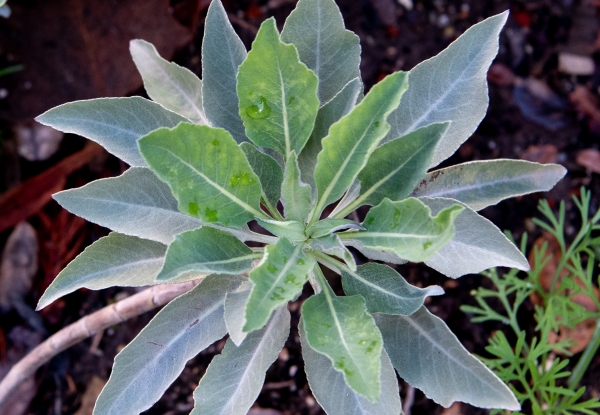 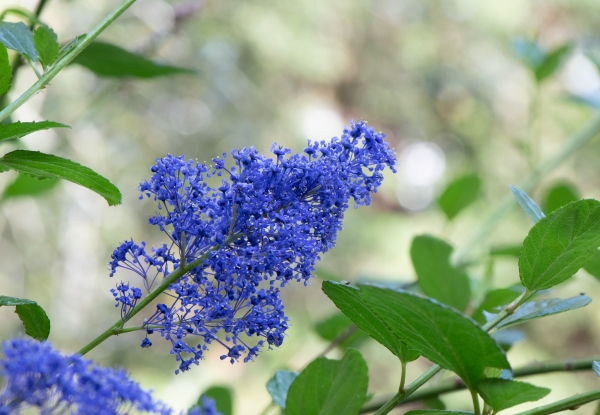 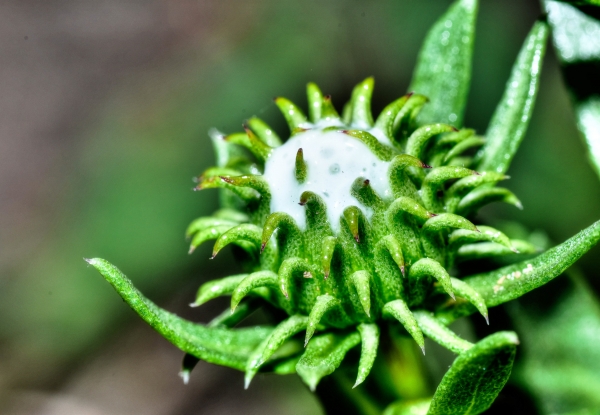 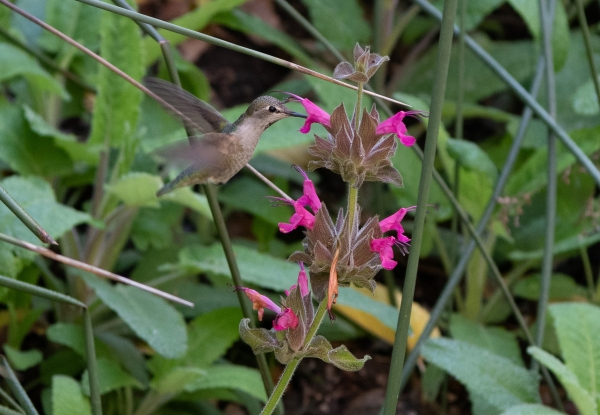 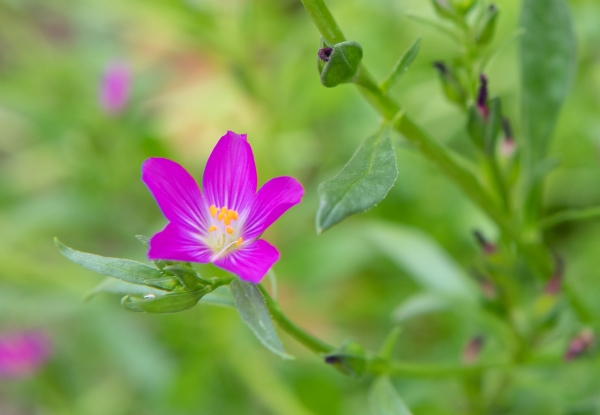